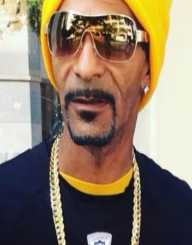 Snoop Dogg is famously known as an American rapper, actor and reality television's star. He likes to mix different genres such as reggae and gangster style of music. He came to prominence with the help of Dr.Dre’s The Chronic.

Snoop also rose to fame when he remained behind bars for murder. Instead of falling back, the arrest made a massive come back for his debut album titled ‘Doggy style’ in 1993.’The Doggfather’ and ‘Reincarnation’ album followed afterward. Snoop has also majored in several films and television drama.

On October 20, 1971, Calvin Cordozar Broadus was born in California. Long Beach, United States. His father Vernell Varnado was a mail carrier and a Vietnam veteran while his mother was called Beverly Broadus. At his tender age, Snoop’s dad abandoned the family. Calvin was named after his stepfather.

Snoop Dogg loved to sing and dance while still in his early years. He later graduated in 1989 from the Long Beach Polytechnic High School. The name ‘Snoopy’ came when his mother personified him with an animated dog in a film called ‘Peanuts.'

After graduation, Snoop was arrested due to the possession of drugs. He went to prison for three years. At the same time, Snoop and his cousin loved to record improvised tapes. By having fun and learning, they came up with ‘123’ group title. One of Snoop freestyle songs included ‘Hold On.' He sang the song when he was invited to sing at an audition. One of the producers Dr. Dre caught his voice and opted to help the man.

In 1998 Snoop signed a contract with Master P’s No Limits Records and he followed with his third song titled as ‘Da Game Is to Be Sold, Not to Be Told.' From 1999 to 2000 Snoop released songs such as ‘No Limit Top Dogg’ and Tha Last Meal.'

In 2004 Snoop Dogg concentrated on his hits where he released songs such as ‘The Masterpiece,' ‘Drop It Like It’s Hot’ and ‘The Hard Way.’ Both albums received negative and positive reviews. He followed them up with ‘Ego Trippin’ and ‘Malice n Wonderland.'

In 2012 Snoop created another stage name titled, Snoop Lion. He later released his documentary which he names as ‘Reincarnated.' Besides being a renowned singer, Snoop has also paired in several films such as ‘Bones’ in 2001, ‘’The Wash’ and ‘Mac and Devin Go to High School’ in 2012. In the process, Calvin starred in some television programs such as ‘The Doggy Fizzle Televizzle.’

Throughout his career, Snoop Dogg has received numerous awards. In 1994 he won the three categories at the Billboard Music Award: ‘Top R&B Album Artist.' From 1994 to 1995 Snoop received awards like MTV Video Music Award for ‘Doggy Dogg World’ song. Others followed such as MOBO Award, Source Award, and Urban Fashion Award among others.

Calvin Cordozar is still married to the love of his life since high school. He married Shante Taylor in 1997.The couple has a daughter called Cori and two sons: Cordell and Corde.