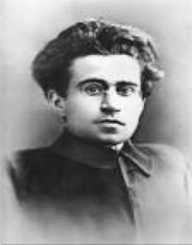 Antonio Gramsci was an Italian intellectual philosopher and politician who founded the Italian Communist Party and shaped the Marxist ideology in Italy.

Antonio Gramsci was born on the Italian island of Sardinia on January 23, 1891. He was the son of an Italian of Albanian origin who settled on the island centuries earlier. He grew up in abject poverty and constant discrimination from the rich mainland Italians, due to their economic situation and foreign origin. He started his schooling years in Sardinia but dropped out when his father went to prison. He completed his elementary education upon the release of his father in the town of Cagliari

In 1911, he moved to join the University of Turin. At the time, Turin and most of the northern part of Italy was the bed of the budding Marxist culture. He met with fellow Sardinians, local socialists, and poor immigrant workers from other regions. In 1913, he got attracted by the ideals of socialism and joined the Italian Socialist Party. He entrenched the notion that the socio-political and cultural problems facing the Italian society could only be solved by a socialist society. Gramsci for some unspecified reasons never graduated from the university.

In what others may call the university of life, Gramsci failed to get a degree but graduated as Marxist. He met several other future socialist leaders like Palmiro Togliatti and his friends. He came into contact with the teachings and intellectual thoughts of Italian thinkers Antonio Labriola, Giovanni Gentille, Benedetto Croce, and Argentinian scholar Rodolfo Mondolfo.

Gramsci got a job at within the Socialist Party as a contributing journalist after dropping out of college. He rapidly climbed up the hierarchy of the party. The socialist soon affiliated with the Russian Communists under Vladimir Lenin. As part of the socialist revolution, Gramsci organized the industrial workers into elected workers councils. The councils were units of representation within the labor movement that were occupied by real workers. When the councils materialized, Gramsci advocated for industrial action by the working class. He believed that industrial action was the only legal way workers wrestle power from the elite ruling class.

Disgruntled by the inactivity of the Socialist party, Gramsci led some young socialists into forming the Italian Communist Party or the Democrats of the Left. He traveled to Russia and later in 1923 to Vienna, Austria. He met prominent Marxist scholars and communist philosophers and politicians. Gramsci became convicted by the advancement of the ideals of Karl Marx as the only way to equalize the disparities within the society.

He became a vocal critic of the Fascist Italian government headed by Benito Mussolini. The government’s intolerance of divergent political views further fuelled the resolve of the communists in Italy. He won an election to the Italian parliament in 1924 as a representative of Veneto. He sent his family to Moscow as he organized his party in Rome. Gramsci tried to consolidate the communists who were torn between Togliatti and him. In November 1926, Mussolini signed into law legislation aimed at dealing with growing political critics. Under the new laws, Gramsci was arrested and detained in Rome. His parliamentary immunity was waived under the emergency laws. He was tried and sentenced to a jail term of 20 years. He was freed in 1934 after serving for eight years in jail for medical reasons. He remained under police house arrest for the remainder of the term.

Gramsci intellectually advanced the need to advance a cultural revolution in addressing the economic and political issues in Italy. He first addresses the power of culture in promoting or inhibiting a just society. He expressed his thought that the ruling elite has over the years propagated the idea that only the rich can lead. The poor Italians thus became subject slaves to the cultural inhabitation of their own minds.

He went to the second inhibiting factor, the economy. Gramsci noted that since the elite was from the rich, they used their economic might to tilt the society’s economy to favor them. The poor and the workers only responded and consumed what the elite fed them. From news, ideologies, infrastructure to religion, the elite dispensed to the workers what they deemed fit. To address the economic subjugation, the society was to be void of the caste or class society. He believed in the ideology of equitable distribution of wealth to all regardless of their social status.

He argued that the state machinery or political power was just an instrument of dominance on the poor working masses within the society. He also addressed the issue of unequal educational opportunities in cultural hegemony. Gramsci noted that in the capitalist socio-economic set up, the elite provided the relevant education to their children in preparation to hand over power to them. The children of the workers, however, got the spoils of the inadequate schooling system that handicapped their intellectual growth.

Gramsci wrote most of his essays during his captive period. Some of the essays included The Intellectuals and On Education. The essay collection titled The Prison Notebooks was printed after his death.

Antonio Gramsci never got adequate health assistance after his release from prison. He succumbed to a multiplicity of illnesses on April 27, 1937, in a Rome clinic. His body was cremated and his ashes buried in the Non-Catholic Cemetery in Rome.