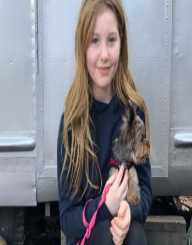 While many people struggle to reach stardom with years of hardwork but prove futile, others become a star at a very tender age.  One of such born stars is Ella Anderson, who from age five has been on the screens and has become a household name especially a lover of Nickelodeon. With her aptitude and skills, she is always a delight to watch. Born on March 26, 2005, Elle Anderson, an American child actress has become one of the most sought for in Hollywood among her age groups. She is best known for her role in Nickelodeon sitcom Henry Danger as the Piper Hart and in the movie The Boss and her most recent film Glass Castle in 2017.

Her Road To Fame

Ella Anderson had a very young career and had already started acting at age five. Her notable acting role at the start of her career was at Disney Channel’s ANT Farm in 2012. She had previously in 2011 made a debut in the TV-movie, The Last Man Standing where she acted as Haley and later in feature film Touchback as Jemie. Touchback starred, among other actors like Kurt Russel, Melanie Lynskey, and Brain Presley. Touchback inspired much of her interest in acting and deciding to become a full-time actress. That enthusiastic moment made her say that "Once we wrapped, I couldn't wait to get back on set again."

Acting with flair and effortless in her display, Ella Anderson featured in as a young girl with a needle stuck in her hand in an episode of Raising Hope. Also showing up impressively the end of roles is not yet as sight as she would later in 2013 feature in Dog with a Blog playing Darcy Stewart and then as Jenny Peeke in Live & Middle. No year comes to an end without Anderson playing a role in a film, and this feat continued in 2014 when she played in the Nickelodeon A Fairy Old Summer as a little girl, as Piper Hart in Henry Danger and also in the film Unfinished Business as playing Bess Truckman.

In 2016 Ella Anderson played Racheal Rawlings in The Boss and also in Mother’s Day as Vickey. Though young, she is very mature and articulate when playing characters and has found her way in the good books of A-list directors. She had previously in 2015 played Olive in the Nickelodeon Ho Ho Holiday Special. Her most recent movie is The Glass Castle which also starred the likes of Brie Larson and Naomi Watts.

Ella Anderson has twin elder brothers, Gabriel and Julian and currently lives with her family in Los Angeles. She loves animals and keeps two pet dogs, Pasha and Olivia. Anderson though young is also entrepreneurial minded and in that line has launched her own beauty care company under the name Aiko by Ella Anderson. She has a high social media followers with about 700,000 Instagram followers and more than 34,000 Twitter followers.