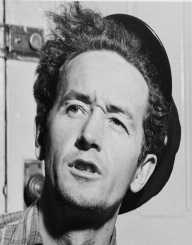 Renowned American singer-songwriter Woody Guthrie was born on the 14 July 1912 in Okemah, Oklahoma in the United States. His parents were Nora Belle and Charles Guthrie. His father was a cowboy, local politician, prizefighter, guitarist, banjo player and land speculator who influenced his son by teaching him Indian, Western and Scottish folk songs. Nora Belle was also musical. In 1927, his father was severely injured in a fire, and Nora was hospitalised. After Charles Guthrie had come out of the hospital, he moved to Pampa, Texas to recuperate. Roy, Guthrie’s eldest brother, was caring for the family, and between 1927-1927, Guthrie lived with various family members. Guthrie’s mother died in 1929, and he decided to move to Pampa, Texas.

After leaving Oklahoma, Woody Guthrie hitched rides on trains, doing odd jobs to support himself. He owned a harmonica and picked up songs as he travelled. Once in Texas, Guthrie acquired a guitar and started writing songs. 1930, Guthrie formed a band with Matt Jennings and Cluster Baker, the Corn Cob Duo. He married Matt Jennings sister Mary in 1933. Their first child Gwen was born in 1935, the same year as the Black Easter Dust Storms. Mary was pregnant with her second child when Guthrie left Texas bound for California. Their daughter Sue was born in 1937.

Woody Guthrie arrived in California in 1937 where he lived the life of a refugee in cardboard constructions in a migrant camp. What he observed during those days affected Guthrie and turned him into a political activist. He was sympathetic towards striking workers and became a vocal supporter of trade unionism and working people. In Los Angeles, a cousin, Allene Guthrie, helped him find work singing traditional songs on KFVD. He started singing with Maxine Crissman.

Mary and the two girls joined Guthrie in December 1937, and the family moved to Glendale, California. The following year, Guthrie and his family, along with his cousin Allene and others moved to Mexico to broadcast for KFVD radio. The venture did not work out, and they returned within a week. Shortly afterwards Guthrie and Crissman’s radio show on KFVD came to an end.

In 1939, Woody Guthrie started writing a column Woody Sez for People’s World.  Around this time Guthrie met Will Geer and got involved with migrant affairs. The same year his third child, a son William was born.

Woody Guthrie moved to New York in 1940. Alan Lomas, a folklorist became interested in Guthrie’s dust bowl experiences and recorded conversations with him. These recordings are now held in the Library of Congress in Washington DC. Around this time, Guthrie recorded his first album Dust Bowl Ballads which consisted of his songs. He went on to record many more songs for Folkways Records. He played music with Lead Belly, Pete Seeger, Sonny Terry, Best Hawes and The Almanac Singers. The Almanac Singers helped revived folk music by making it accessible to the mainstream. Later they changed their name to The Weavers. The Weavers became famous during the 1950s and set the stage for the folk music scene of the 1960s.

In 1941 Guthrie took his wife and children to Oregon where he worked on a documentary film project. He was employed by the Bonneville Power Administration to write songs about the Columbia River. After the work had been finished, Guthrie and his family returned to Texas. He became restless again and hitchhiked back to NYC. Around this time, his first marriage ended.

During the conflict, Woody Guthrie first served in the Merchant Navy and then enlisted in the US Army.

Woody Guthrie met his second wife Marjorie Greenblatt Mazia in New York City, and they were married in 1945. His creativity continued, and during this period he started writing songs for children.

In 1953 the couple divorced and left Marjorie and the children in New York, Guthrie went to California with Ramblin’ Jack Elliott.  Symptoms of his undiagnosed Huntington Disease were starting to appear with increasingly erratic behaviour. In California, he met Anneke Van Kirk through his friend William Geer. They married in 1953 and had one daughter, Lorina.

Woody Guthrie returned to New York with his wife and child and the couple divorced in 1954. Anneke had found Guthrie too difficult to cope with. She adopted their daughter out. Lorina died in a car accident in California when she was 19.

In 1954 Guthrie was diagnosed with Huntington’s Disease and was institutionalised. Guthrie inherited the gene for Huntington’s Disease from his mother. He died of the disease, so did two of his daughters from his first marriage. His other children have been unaffected by the genetic condition.

Woody Guthrie spent the last twelve years of his life (1954-1967) institutionalised as the disease took its toll. His second wife Marjorie visited him regularly. He died on the 3 October 1967 at Creedmoor State Hospital in Queens, New York.

Woody Guthrie left a substantial bodywork including many memorable songs, two novels, art, manuscripts, poems, and letters. He influenced important musicians including Bob Dylan, Joan Baez, Phil Ochs and others. His contribution to American culture has long been recognised and he has won many awards including the Songwriter’s Hall of Fame, Pioneer Award (2012), The Rock and Roll Hall of Fame Museum (1988), The Nashville Songwriters Hall Fame (1977), The North American Folk Alliance Lifetime Achievement Award (1996) and The Oklahoma Fall Fame (2006).

Woody Guthrie influenced a generation of musicians including Bob Dylan and Phil Ochs. His song This Land is Your Land is considered by many in America to be an unofficial national anthem.

Bound for Glory, a novel was published in 1943 and was well received. The book is based on his experiences of hardship and survival during the Dust Bowl period.