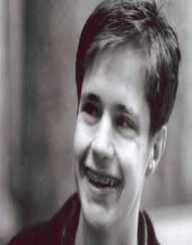 Matthew Wayne Shepard was born 1st December 1976, to Dennis and Judy Shepard. He was born in Casper, Wyoming, in the United States, and had a younger brother named Logan, who he was very close with.

Shepard studied at Crest Hill Elementary School, then Dean Morgan Junior High School, and finally Natrona County High School. He got on well with all his fellow students, but he did get teased quite a bit because of his slight stature and lack of athletic ability. He had a keen interest in politics from a young age.

Matthew Shepard's father went to work for Saudi Aramco in 1994, and the family moved to the Saudi Aramco Residential Camp in Dhahran, in Saudi Arabia. He went to the American School in Switzerland, and he graduated in May 1995.

Upon returning to the U.S., Shepard went to Catawba College in North Carolina, and then Casper College in Wyoming. He then studied at the University of Wyoming, with his major being political science and his minor being languages.

While on a high school trip to Morocco in 1995, Shepard was beaten and raped. His mother claimed the experience caused him to have panic attacks and episodes of depression. One of his friends also felt that he had become involved with drugs during his college years because of the incident.

Matthew Shepard was admitted to hospital on several occasions because of his clinical depression and suicidal tendencies.

On 6th October 1998, Matthew Shepard met up with Aaron McKinney and Russell Henderson at a local bar, and subsequently, McKinney and Henderson said they would drive Shepard home.

Instead of driving him home, they drove him to a remote area in the country. They robbed, pistol-whipped and tortured Shepard, then tied him to a fence and let him die. Later reports said the pistol-whipping was brutal Shepard’s skull was fractured.

The girlfriends of McKinney and Henderson testified that neither of the men was affected by alcohol or drugs at the time of the attack.

McKinney and Henderson returned to town after their attack on Shepard, and McKinney picked a fight with two Hispanic youths. Police officer Flint Waters attended the scene of the fight, and upon going through McKinney’s truck, a blood-smeared gun was discovered. Waters also found Shephard’s shoes and his credit card.

Matthew Shepard was discovered some hours later by a local cyclist who alerted the police. Reggie Fluty was the first police officer to the scene. As the medical gloves issues by the government were faulty, Fluty used her bare hands to clear an airway in Shepard’s mouth.

Fluty found out the next day that Shepard was HIV positive and she may have been exposed to the disease through open wounds on her hands. After treatment for several months, Fluty was declared negative for HIV.

Matthew Shepard's injuries were severe, and the doctors couldn’t operate. He remained on full life support, and never regained consciousness. He was declared dead on 12th October 1998, six days after the attack.

The trial of McKinney and Henderson

McKinney and Henderson were arrested and charged with kidnapping, aggravated robbery, and attempted murder. When Shepard died, the charges of attempted murder were upgraded to first-degree murder. Their girlfriends, Kristen Price, and Chasity Pasley were both charged with being accessories after the fact.

McKinney’s pre-trial hearing was in November 1998. In December 1998, Pasley pleaded guilty to her charge of being an accessory after the fact to first-degree murder.

In April 1999, Henderson pleaded guilty to murder and kidnapping, which meant he didn’t have to go to trial. He also agreed to testify against McKinney, which would result in Henderson avoiding the death penalty. In return, he was handed two consecutive life terms.

McKinney’s trial was held in October and November 1999. It was alleged that McKinney and Henderson pretended to be gay to lure Shepard into their truck so that they could rob him. McKinney’s lawyer argued his client went temporarily insane by alleged sexual advances made by Shepard, and this is what drove the killing. The judge rejected the defense.

McKinney was found not guilty of premediated murder, but guilty of felony murder. The jury began to deliberate on whether he should receive the death penalty, but Shepard’s parents did a deal which saw McKinney sentenced to two consecutive life terms with no parole.

Speculation continued for years after the case, with some advocating that drugs were the primary cause of the attack, not Matthew Shepard's sexual orientation.

At the time of Matthew Shepard attack, there was no law enabling prosecution of crimes based on sexual orientation being tried as hate crimes. After several attempts at getting a law passed, finally, in 2007, the Matthew Shepard Act was introduced as federal bipartisan legislation. As it passed each house, President George W. Bush announced he would veto the legislation if it crossed his desk.

When Barack Obama was elected as President in 2008, he announced he was committed to passing the Act. The legislation was introduced and debated, and Obama signed it into law on 28th October 2009.

In 2009, Judy Shepard released a book about the events and the background of Shepard’s upbringing. It was called, The Meaning of Matthew: My Son’s Murder in Laramie, and a World Transformed.