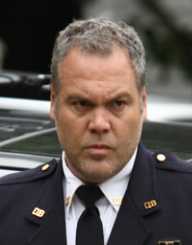 Vincent D'Onofrio is an American actor of Italian heritage. His bulky physique and rogue appearance made him cast in many bad boy characters.

Vincent Phillip D’Onofrio was born on June 30, 1959, in New York. He was the youngest of the three children born to Gennaro and Phyllis D’Onofrio. His father worked in theater, while his mother was a waiter in a local hotel. After his parents divorced, he moved to Florida with his mother.

His early childhood was punctuated with the love of stand-up magic tricks, acting, and theater. D’Onofrio graduated from Hialeah Miami High School. He then enrolled at the American Stanislavski Theater, and later the Actors Studio. D’Onofrio left for Colorado with a friend.

With no degree, he worked in several odd jobs to pay his rent and upkeep. He worked in construction sites, restaurants and messenger in various eateries. Due to his large stature, he worked as a bouncer in nightclubs and at the Hard Rock Café.

Vincent D'Onofrio made his maiden debut at Broadway in 1984. The play Open Submissions gave him the leverage to the limelight of acting. The year 1987 gave him a breakthrough in his career.

He featured in the military film Full Metal Jacket. His role as an unstable private soldier opened his versatility in acting. The same year, he was given a role in the film Adventures in Babysitting. The following year, D’Onofrio got another offer. He played a simple supporting role in the film Mystic Pizza. Another of his notable supporting roles was in Men In Black. D’Onofrio was the evil bug man.

In 1997, Vincent D'Onofrio switched to television acting. After a series of television productions, he went back to film production in 2012. In his television production, D’Onofrio starred in diverse series.  He was in the program Homicide: Life on the Street, The Break-Up, and The Player. He tried his hand in singing in 2009. He was an appearance in Joe’s Pub.

In 2012, he returned to the film industry. In the film Chained, he was the serial killer and kidnapper. The following year, he was in another production Escape Plan. This was a big stage film. For the first time, he featured in a movie with Hollywood stars Sylvester Stallone and Arnold Schwarzenegger.

The year 2014 was a better year in his career. He did a film and recorded some songs. The film known as The Judge was well received in Hollywood. The two songs were recorded with the help of Dana Lyn, a renowned musical composer.

When Jurassic World premiered in 2015, Vincent D'Onofrio was part of the cast in the film. To add on his illustrious acting career, he tried his success in the film production. He directed several films including The Whole World, The Velocity of Gary, and Steal This Movie.

Vincent D'Onofrio got married on March 22, 1997, to actress Carin van der Donk. The couple has two sons. His other child is from an earlier relationship with Greta Sacchi in the 1990s. Together with his wife Carin, the family currently lives in Gramercy Park, New York.

He is also a proponent of banning the use of big firearms in the US. This was evident in the 2011 advert he did with Citizens Crime Commission of New York.

In 1996, Vincent D'Onofrio was a double winner. The first award was the Golden Space Needle Award. The second was the Lone Star and Television Award. Both awards were for his acting role in the 1996 film The Whole Wide World.

The Saturn Award for his role as supporting actor came in 1997. This was in his supporting role in the film Men In Black.  He is a member of the Woodstock Film Festival Advisory board since 2011.

Despite the divorce of his parents early in his childhood, Vincent D'Onofrio took matters to his own hands. He chose to follow acting and theater. The decision to relocate to Colorado was tough, but eventually, the gamble paid off. He made his debut in 1984, and the rest of his career fell in place.

In giving back to the society, he has joined hands with his father and sister Elizabeth in promoting the film industry. The three were honored to open the RiverRun International Film Festival in North Carolina.