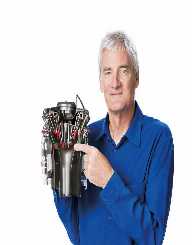 James Dyson was born on May 2, 1947, in the Cromer, Norfolk, England. His parents are Alec and Mary Dyson. He also has two siblings. Sadly, Alec died when James was still a child.

As a child, James Dyson attended many different schools. He spent much of his primary school years at Gresham’s school, which was a boarding school. While at Gresham’s, James Dyson joined a track team. He was not especially fast, but he stayed on the team, as he was determined to win. After he graduated from the school, he went on to study at the Byam Shaw School of Art in 1965. However, he only stayed at the school for one year before transferring to the Royal College of Art to study interior design. He stayed at this school until 1970, before finally studying engineering.

After graduating from college, James Dyson took up his first professional job at Rotork Controls Ltd. At this job, Dyson was allowed to let his creativity flow as he designed boats. He worked closely with his boss, Jeremy Fry, who allowed him to be as creative as possible. In 1974, James Dyson moved onto working on an invention of his own: the ballbarrow. Like the name implies, this was a new form of the wheelbarrow, which had a ball instead of a wheel. This made the item easier to move around than a traditional wheelbarrow. This was to be the beginning of many great inventions. Some of Dyson’s most popular (non-vacuum) inventions are listed below.

James Dyson started to work on vacuums in the late 1970’s. He was in the business of improving current products, and he noticed that bags were a complicated and unnecessary part of vacuums. He worked tirelessly in the late 1970’s and early 1980’s to find a way to do away with them. The Dyson vacuum is famous for being the first bagless vacuum., which came out in 1983. The first Dyson brand vacuum was called The G-Force Cleaner. With this vacuum (when it was first introduced) people would only need to dump out the trash in their vacuums, instead of replacing the vacuum bag. This style of vacuum saved people both time and money, but that didn’t make it an instant hit. The vacuum did not sell well in the UK at first, so Dyson market it in other countries. The vacuum ended up selling well in Japan. James Dyson later invented a new kind of vacuum, the Dyson DC01, which he marketed in the UK in the early 1990’s. This vacuum sold wonderfully. Some other Dyson vacuum models are listed below.

James Dyson has won about a dozen personal awards in his lifetime. Some of his most prestigious awards are listed below. James Dyson won his first major award, The Prince Philip Designers Prize, in 1997. James Dyson was appointed as a Commander of the Order of the British Empire in 1998, for his work with his inventions.

James Dyson is a member of the following prestigious organizations: Royal Academy of Engineering, Royal Society, Order of Merit, and the IEEE.

James Dyson made his own foundation in 2002. The foundation was made to encourage students to think about having a career in engineering. The foundation also loans supplies and other items to schools, as well as giving some schools items to keep. Some of the schools that the James Dyson Foundation supports are the University of Cambridge and the Imperial College London. On an individual student basis, the foundation also gives out awards to young inventors studying in the field of interior design

James Dyson married Deirdre Hindmarsh. The couple has three children together: a daughter, Emily; and two sons, Jacob and Sam.