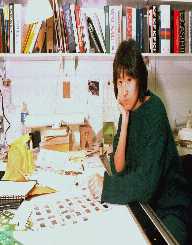 Born to Chinese immigrants in Athens, Ohio on October 5, 1959, architect and artist Maya Ying Lin has a long line of distinguished ancestors. Her father Henry Huan Lin was the former dean of the Ohio University College of Fine Arts and a ceramist. Mother Julia Chang Lin is a poet and was Professor of Literature at Ohio University. Lin Huiyin, reportedly the first female architect in China, is her aunt. Lin Juemin, a revolutionary who was martyred during the Second Guangzhou Uprising in 1910, was cousin to her grandfather. Her elder brother Tan is a professor of English at the University of Virginia and a poet.

A solitary child, Lin kept herself to herself. Her favorite activities were hiking, reading and bird watching. She also enjoyed building miniature towns and working in her father's ceramics studio. She attended the Putnam Hall “laboratory school” of OU's department of education, where alongside her artistic gifts she showed an early talent for mathematics. When she was only in fourth grade, her teacher suggested a test for specially gifted children. She was also fascinated by environmental matters. On one occasion, while in 4th grade, she wrote a stern letter to a newspaper about trash outdoors she had seen whilst hiking. On another, she demonstrated against whaling in a supermarket parking lot.

As Lin began to attend secondary school, her feelings of being different began to intensify. Partly because of being an immigrant and looking different, partly because of being - as she described herself - “a class-A nerd”, she began to feel she would never fit in. She was not a white American, though she had been brought up as one. But she had lost all contact with her extended family in China and could not read the censored letters in Mandarin which occasionally arrived. In her own words, she felt herself to be “without a past”.

After finishing high school, Lin entered Yale University in New Haven to study architecture. She felt that architecture best combined her greatest loves - sculpture, mathematics, and computer studies. She spent her junior year in Denmark, studying Danish architecture. Fascinated by the fact the Danish cemeteries were also used as parks, she decided to center her senior year project around the architecture of death.

While still in her senior year at Yale, Lin entered a competition to design a monument commemorating soldiers who had died in the Vietnam War. Her design was simple: two polished granite walls, each 247 feet long, meeting at an angle of 130°. The two arms of the “V” were to point at the Lincoln Memorial and the Washington monument. They were to be inscribed with the names of the 58.000 soldiers killed or reported during the Vietnam War.

Lin said later that she designed the monument for herself and entered into the competition as an exercise, never expecting to win. Her design had only earned a grade B in her class at Yale.

Yet she did win, which unleashed a national controversy. A group of Vietnam veterans were particularly vocal in their objections to the design, calling it “the black gash of shame”. Ironically, most people were angry about the names on the wall, which had been one of the veteran`s requests for the monument. Lin was shunned, avoided and even attacked for a time as a non-American girl too young to have served in the war. Few people stood by her during this ordeal. But with great artistic courage for a 21-year-old, she stood by her design fiercely for a year until it was finally dedicated in 1982. Today it is a huge tourist magnet, drawing 10.00 visitors a day.

During the unrest caused by the competition, Lin completed her studies at Yale and graduated with a Bachelor of Arts degree in architecture in 1981. She went on to achieve a Master's degree at Yale, graduating in 1986.

Lin went on to design further structures, including designs for a Pennsylvania stage set, an outdoor gathering place at Juniata college and a park, as well as smaller sculptures. Her second nationally acclaimed project was the Civil Rights Memorial in Montgomery, Alabama (1989). Her design was inspired by Martin Luther King's speech “I have a Dream”. In it, he stated that the struggle for civil rights would not be complete “until justice rolls down like water and righteousness like a mighty stream". Her design consists of an outward-curving wall inscribed with these words, down which water runs. Slightly off-center is a 12-foot disk inscribed with the names of 40 people who died in the struggle for civil rights. Moving water also covers this, indeed water was to become increasingly important for Lin in her designs.

Further landmarks include “Groundswell”, made for the Wexner Center for the Arts (1993) and the Wave Field at the University of Michigan (1995).

Maya Lin, who never wore makeup or went out on dates, became engaged to her husband Daniel Wolf on a Colorado pack trip whilst escaping an electrical storm in a horse trailer. They married in early 1997 and have two daughters, India and Rachel. (Lin supposedly took her sketchbook along on her honeymoon). Husband Daniel Wolf is an art and photography dealer and collector. Soon after the wedding, Lin began to design a home for her husband and their daughter. With many philosophical ideas about the meaning and value of art, she also began to write. “Boundaries” appeared in September 2006, “Topologies” (which she co-wrote) was published in 2015.

In 2014, the couple bought the former city jail in Yonkers to house Daniel`s art collections and Lin`s sculptures. An ardent environmentalist since her schooldays, she also called into being the “What is Missing?” Foundation. This project, described by the artist herself as her last memorial, aims at increasing awareness of the mass extinction of species taking place around us.

Lin, who now owns the Maya Lin Studio in New York City, was presented in the documentary film “Maya Lin: A Strong Clear Vision”. The documentary won the Academy Award for the Best Documentary Feature in 1994. Other prizes include the Rome Prize (1999), the Finn Juhl Prize (2003) and the Dorothy and Lillian Gish Prize (2014). She was elected Alumni Fellow of the Yale Corporation in 2002 and was a jury member on the “World Trade Center Site Memorial Competition”.

In 2005, she was elected a member of both the “National Women's Hall of Fame” (Seneca Falls, NY) and the American Academy of Arts and Letters. The Vietnam Veterans Memorial which had caused such controversy was awarded the prestigious 25-Year Award from the American Institute of Architects in 2007. In 2009, she was awarded the National Medal of Arts by Barack Obama and was honored with the Presidential Medal of Freedom in 2016.

Lin has frequently bemoaned the fact that she became typecast as a result of the Vietnam Veterans Monument, the work for which she continues to be best known. For a time, she was known as the “Death Queen”; people assumed that a designer of monuments could never smile, and indeed shouldn`t smile. Despite this, she has gone on to create many objects of lasting beauty in an ephemeral world, and will certainly continue to do so. In her own words, “Creativity is magic; it's not a matter of finding an idea, but allowing the idea to find you”.