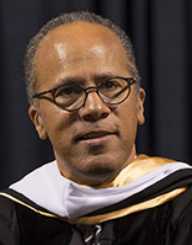 Lester Holt was born on March 8th, in 1959. He is a celebrated American journalist particularly for being a news anchor at the Dateline NBC and NBC Nightly News owing to his exceptional skills,

Holt was promoted to become a permanent news anchor with the NBC in June 2015.

This made him the first African-American individual to anchor alone on the weekday network newscast.

Lester Holt was born Lester Don Holt Jr. on March 8th, in 1959. His place of birth was in Marin County in California in the United States. He is the son of Lester Don Holt, Sr. and June Holt. Holt’s grandparents were of Jamaican descent.

Lester Holt went to Cordova High School situated in Rancho Cordova after which he graduated in 1977. After that, he joined the California State University, Sacramento. Right from a tender age,

Holt had developed a special interest in broadcasting. While in high school he made public announcements to the entire school’s fraternity. Similarly, in college, he continued honing his broadcasting skills by working in radio.

Lester Holt landed himself a job in his career field in 1981. At the time, he worked as a WCBS-TV reporter in the New York City.

The following year, he landed on a similar job post with KNXT situated in Los Angeles. Nevertheless, in 1983, he was back working with WCBS-TV both as a news anchor and a reporter.

Shortly after, in 1986, Lester Holt again switched stations, this time going ahead to work with WBBM-TV located in Chicago. He spent about 14 years working for the station as a news anchor for the evening news.

What made Holt unique was that he not only reported from the news desk, but he also toured to unfavorable anchoring spots including Northern Ireland, Haiti, Somalia, and Iraq.

In 1990, Lester Holt earned himself the Robert F. Kennedy Journalism Award for the work that he had contributed on CBS’s show dubbed 48 Hours: No Place Like Home.

In 2000, Lester Holt joined NBC. Because the presidential election was around the corner, this became one of his initial projects with NBC. For about one year beginning in 2002, he hosted the NBC program called Nightly News.

This program featured the conflicts that were ongoing in Iraq. In 2003, he was bestowed with another role in NBC to anchor Today’s weekend edition.

During the same period, Lester Holt anchored another program on MSNBC called Lester Holt Live. In 2007, he also became part of the Nightly News weekend edition on NBC.

Despite being a renowned figure on TV, his big break came in February 2015 after taking over as the interim anchor for the program NBC Nightly News.

This occurred after Brian Williams was suspended from the post for allegedly lying in his resume regarding his qualifications. In June the same year, Holt took over as the main anchor of the show.

Lester Holt is married to Carol Hagen. The two have got two sons named Cameron and Stefan. The family lives in Manhattan.