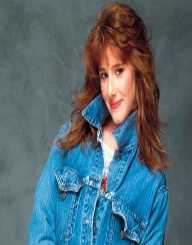 Pop sensation and teen icon Tiffany Renee Darwish was born on October 2, 1971, in Norwalk, California, United States of America. Known to the world through only her popular mononym Tiffany Renee Darwish’, she was born to her pilot father James Robert Darwish and mother Janie Wilson, who later divorced during her early young age.

She began singing at the age of four and learned the lyrics of the song "Delta Dawn" by heart. After the divorce of her parents, Tiffany Renee Darwish attended Leffingwell Christian High School while living in the custody of his father, a strict follower of Baptist regulation who often tried to impose his authoritarian views upon his daughter. However, Tiffany in the company of her other friends often flouted such high-handed restrictions imposed by her father on her.

Born to sing Tiffany Renee Darwish made her debut performance in 1981 in company with country music singer Jack Reeves at a place called Narods in Chino, California. While singing at the Palomino Club situated in North Hollywood, Darwish grabbed the attention of Hoyt Axton, an accomplished American folk music singer, and his mother, Mae Axton.

At the insistence of Mae Axton, Darwish performed at the Ralph Emery Show in Nashville, Tiffany Renee Darwish where she showed her prowess by singing Tammy Wynette's "Your Good Girl's Gonna Go Bad" and Juice Newton's "Queen of Hearts." During the year 1982, she toured extensively throughout Alaska.

Her manager until 1987, George Tobin, was very much impressed after hearing one of her demo tapes, and eventually made an agreement with her for a recording contract.

In 1985, she was invited to appear in the American television talent hunt show ‘Star Search’ along with the host of the show Ed McMahon and was placed in the second position according to her overall performance. American media company MCA offered a recording contract to her. She released her first studio album ‘Tiffany Renee Darwish’ in 1987.

Her first single of the album ‘Danny’ failed miserably and remained unsuccessful in entering the charts. Following the debacle, her manager George Tobin asked her to go for a nationwide tour of the shopping malls. Accordingly, Tiffany Renee Darwish embarked on a tour titled “The Beautiful You: Celebrating the Good Life Shopping Mall Tour '87”.

After the conclusion of her promotional tour, the second single of her album "I Think We're Alone Now," suddenly became immensely popular. It soon became a number one hit on the Billboard Hot 100 List. Released at the age of 15, this single remains her biggest hit to date. In 1988, Tiffany Renee Darwish released a remake of the Beatles' "I Saw Her Standing There" and renamed the song “I Saw Him Standing There." The song successfully climbed up the chart and eventually settled at the seventh position on the Hot 100 List.

Her last single "Feelings of Forever" from her self-titled album ‘Tiffany’ was released in 1988. The single failed to achieve any major success in the other parts of the world but remained a moderate success in the USA and the UK. The single had a debut success of over 4.1 million sale records and could successfully enter the chart by this sales figure.

Her second album ‘Hold an Old Friend's Hand’ was released in late 1988. The first single of the album "All This Time" successfully made it to the Top 10 list. Buoyed by some favorable and encouraging reviews by the critics the album successfully went platinum.

Tiffany Renee Darwish ended her association with George Tobin, her long-term manager, shortly after her 18th birthday and appointed Dick Scott and Kim Glover, manager of the American Boy Band ‘New Kids on the Block,’ to look after the affairs of her singing career.

After a highly successful decade of the 1980s, Darwish found it tough to survive on the face of a change of taste among the music lovers during the early 1990s. The new generation of the 90s started preferring harder-edged rock and rap instead of the 80s style of dance-pop. Trying to come to terms with this new trend Tiffany Renee Darwish released her third album ‘New Inside’ in 1990.

The album received mixed reviews from the critics. However, it achieved success in Japan. She was one of the participant singers among many other celebrities in the song "Voices That Care," which rose to the number 11 position on the Billboard Hot 11.

On a steady decline in popularity during the 1990s, Tiffany released her 1993 album ‘Dreams Never Die” after again reuniting with her previous manager Tobin for a brief period. The move did not yield the desired success, and her image was gradually waning away from the public memory. However, her 2000 album “Color of Silence” was able to resurrect her image to a considerable extent.

The album received encouraging reviews from all the concerned quarters that mattered and was said to be a big surprise as well as one of the best pop albums of the year.

Her nude photograph was the highlight of the April 2002 issue of Playboy magazine, making it the highest selling issue of all times. From 2005, Tiffany Renee Darwish began appearing on some television shows as well as in commercials.

She also attended and performed in some of the gay rights events. In May 2005, she released her sixth studio album ‘Dust Off and Dance,’ which saw a certain deviation from her earlier style. She followed the release of the album with a promotional tour.

The album was nominated for six JPF Awards in September 2006. "Be With U Tonite," one of the singles of the album won the recognition of best dance song of the year and also best dance CD of the year.

Tiffany Renee Darwish married makeup artist Bulmaro Garcia on April 4, 1992. Their son Elijah Bulmaro Garcia was born on September 17, 1992, in Canoga Park, California. The couple eventually divorced in 2003. She again married British businessman Ben George on August 4, 2004. They have remained unseparated to date. The couple lives in Los Angeles. Also, Tiffany is in possession of a home in Cannock, England.