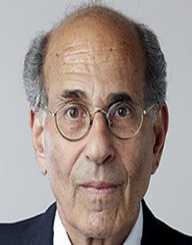 Richard Axel is a Nobel Prize-winning American neuroscientist famed for his discoveries in molecular biology.

Richard Axel was born in New York on July 2, 1946. He was the eldest child in the family. His parents were Jewish immigrants from Poland. They had fled to the US after the German invasion of their native country. Axel was raised in a middle-class family. His initial inspiration was sports. He was an avid baseball and basketball player.

He attended a local elementary school in New York. To his dismay, his principal organized his entry to Stuyvesant High School. Axel had hoped to enroll at the City High School in New York, where sports was highly encouraged. Stuyvesant was a specialized school known for exceptional students. He graduated from high school in 1963.

Richard Axel got his first degree from Columbia University in 1967. At the university, Axel got his first exposure to genetics. He worked under Professor Bernard Weinstein as a Research Assistant. To avoid being drafted into the military, Axel enrolled to study medicine at John Hopkins University. Axel was a poor student, and his lecturers found nothing hopeful in him. He was allowed to graduate early with one commitment. Axel committed that he would never work on living humans. He then earned his Doctorate in Medicine from John Hopkins School of Medicine in 1971.

Richard Axel returned to practice medicine at the Columbia University. Keeping to his promise, Axel joined the pathology department. He performed autopsies on cadavers. Soon after, his superiors detected his incompetence. He was told not to practice on dead people.

After his second rejection, Professor Sol Spiegelman called him to work in his laboratory. He briefly worked in the molecular department. Soon after, he became an associate professor under Spiegelman. Axel created his lab and started researching in 1974. He made a landmark discovery when he managed to discover a concept of isolating genes. This led to a transformation on how scientists viewed the study on DNA.

After four years of practicing molecular science, Richard Axel became a full professor in 1978. Since then, he has been involved in numerous discoveries in the field of molecular biology. His continued research on DNA isolation led him to discover the connection between CD4 cells and the HIV.

In 1988 while working at Columbia University, his team discovered the affinity of the human CD4 cells in attracting the HIV. With the discovery came the knowledge that soluble CD4 cells delayed the spread of the deadly virus. This breakthrough in the laboratory meant that Aids patients could prolong their lives with the supplement of drugs to boost their immunity.

In 1991, Richard Axel teamed up with another neurobiologist Linda Buck. In their research on the human brain, they discovered how humans and other animal brains decode smells from the nose receptors. This finding led to their publication winning the Nobel Prize in 2004.

Together with a team of scientists, Axel is still studying the different dimensions on the human brain functions.

Throughout his scientific journey, Richard Axel has been feted by many organizations. From the first one 1969 to the most recent in 2014, he has received 24 awards. He also has honorary degrees from Bar Ilan University in Israel, Montclair State University and Rockefeller University.

Axel registered patents in 1983. The scientific patents are known as ‘Axel Patents,’ gave him of royalties amounting USD 600 million.

The scientist got married to Cornelia Bargmann. The couple has two sons, Adam and Jonathan. They still reside in New York.

Though Richard Axel is no longer active in athletics, he still keeps close friendships with his former sporting friends. One such friend is former Lakers center, Kareem Abdul Jabbar. Axel is also known for his long friendships and associations with former classmates.

Like many great scientists, Richard Axel stumbled on his potential. He had to change his priorities in education. The rejections in college only served to further his resolve to gaining knowledge. At last, he discovered his niche in micro molecular biology.

His contribution in the field of science had a profound impact on the production of HIV/AIDS drugs worldwide. Research is still going on, as to how the cancer cells can be isolated from healthy ones. If this is achieved, the cost of treatment on cancer patients could come down proportionally.