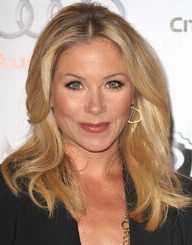 Christina Applegate was born in Hollywood, California on 25th November 1971. Her parents are Robert Applegate and Nancy Priddy. She grew up with her mother. The parents divorced days after she was born. Applegate inherited artistic genes from her parents. Her father was a record producer, while her mother was a performing singer and actress.

She first appeared on the television series Days of Our Lives with her mother while still a baby. Applegate starred in two baby feeding bottle commercials as a toddler. In 1979 at the age of seven, she debuted in the film Jaws of Satan. She made a series of television appearances as a child. In 1981 she starred in the movie Father Murphy. She played Grace Kelly in the movie Grace Kelly in 1983. She appeared on several television movies as a child.

After a stint as a child actor, Applegate played her first major role in 1987. At the age of 16, she starred in the television series Married…With Children. In the series, she played the role of Kelly Bundy, a promiscuous woman. She won her first accolades in the acting career. The series aired for a decade ending in 1997.

In the 1990s she had a good run in the film industry. She got a role in Streets, a film produced in 1990. She played a role in the 1991 production Don’t Tell Mom the Babysitter’s Dead. Applegate starred in the film Vibrations released in 1995. The following year, Applegate played a minor role in the highly acclaimed film Mars Attack.

In 2001 she cast in the film titled Just Visiting. The film set in the background of the 12th century was negatively received by the film critics in the US. Applegate shrugged off the commercial setback with two films Wonderworld, and Grand Theft Parsons in 2003. Applegate had a guest appearance in the television series Friends in 2002. In 2004 she played a lead role in the film Employee of the Month. In 2009 she finished her role in the television comedy Samantha Who?

From 2010, Applegate made several appearances in awarding winning films in Hollywood. Notable films she appeared in are Going the Distance done in 2010, Anchorman 2: The Legend Continues done in 2013, Vacation produced in 2015, and Bad Moms produced in 2016. In 2017 she acted in the film Crash Pad. Applegate also stared in Broadway Theater productions. Some of the plays she appeared in are nobody Leaves Empty Handed, and Sweet Charity, an adaptation of the 1966 musical by the same name.

In her acting career, she has shared the scenes with great actors like Courtney Rockcliffe in the 2002 production The Sweetest Thing. She also cast along Ben Affleck in the 2004 comedy film Surviving Christmas.

Applegate has been nominated over 30 times for film and acting awards. Out of these nominations, she won eight of them since her first one in 1987. In 2008 she got the most nominations, seven in all for her role in Samantha Who? Unfortunately, she did not win in any of the categories.

Applegate got married twice. She first married Jonathan Schaech on 20th October 2001. They divorced in August 2007. She then remarried on 23rd February 2013 to Martyn LeNoble. She has a daughter with LeNoble. The couple lives in Los Angeles.

She is a strict vegetarian. As an animal rights activist, she is a lead advocate against the animal fur trade in the US and globally. She once appeared on a television commercial against the fur trade.

She was diagnosed with stage one breast cancer on 3rd August 2008. As part of the treatment, she changed her diet to the recommendations of her doctors. Applegate had a double mastectomy to secure her life. On 19 August 2008, doctors certified her as cancer free. Like most patients, she inherited the genetic traits of her mother. Priddy suffered and successfully recovered from breast cancer.

Applegate is involved in serious charity work. She fundraised for a children’s charity fund in 1992. She is a member of the Lee National Demin Day. This platform fundraises for the support of women with cancer. She is the founder of Right Action for Women, a cancer awareness organization in the US. She also supports several other animal protection organizations in the US.

Christina Applegate is still actively inspiring young talent in and out of the acting industry. She is an icon in the social welfare programs in the US.