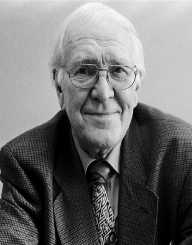 Earl W. Sutherland Jr. was an American pharmacologist and biochemist who was awarded the Nobel Prize in Physiology or Medicine in 1971. Born on November 19, 1915, Earl W. Sutherland Jr received the Prize "for his discoveries concerning the mechanisms of the action of hormones," specifically epinephrine through second messengers cyclic adenosine monophosphate or cyclic AMP. Earl W. Sutherland Jr taught at the Washington University School of Medicine from 1945 to 1953 and at the Case Western Reserve University, where he spent ten years. He later moved to the Vanderbilt University School of Medicine Nashville, Tennessee as professor of physiology where he remained until 1973.

Earl W. Sutherland Jr continued his research on cyclic AMP there, with financial backing from the Career Investigatorship he received from the American Heart Association in 1967. His research in this field won him the Nobel Prize in Physiology or Medicine in 1971. Earl W. Sutherland Jr remained at Vanderbilt University until 1973. He served as a member of the editorial board for the Biochemical Preparation Journal from 1951 to 1956. From 1957 to 1958, Earl W. Sutherland Jr also served on the Journal of Pharmacology and Experimental Therapeutics.

Earl W. Sutherland Jr was married twice first to Mildred Rice in 1937. The couple had two sons and a daughter. They divorced in 1962, and he went ahead to marry Dr. Claudia Sebeste Smith, then an assistant dean at the Vanderbilt University. Sutherland died on March 9, 1974, at age 58 in Miami, Florida of internal bleeding from surgical complications after suffering a massive oesophagal. Hemorrhage.

Earl W. Sutherland Jr received several career awards and honor including the ToraldSollman Award in Pharmacology from the Gairdner Foundation International Award, 1969, Albert Lasker Award for Basic Medical Research, 1970, Nobel Prize in Physiology or Medicine in 1971 and the National Award of Science from President Richard Nixon. Earl W. Sutherland Jr was also a member of scientific societies including the American Society of Biological Chemists, American Society for Pharmacology and Experimental Therapeutics and American Chemical Society among others.