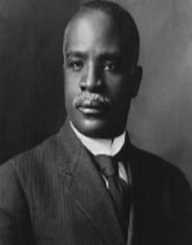 Kelly Miller was born in the town of Winnsboro, South Carolina, on July 18, 1863. His father, Kelly Miller Senior, was a freed black man. His mother, Elizabeth, was a former slave. He had nine siblings.

Miller started his education in the local primary school in Winnsboro. After that, he studied at Dunbar High School. He then spent three years at the Fairfield Institute. He earned a scholarship for Howard University, where he studied mathematics, Latin, and Greek. He earned his degree in 1886. He then spent some time studying advanced mathematics with the English scientist Edgar Frisby. He also met the scientist Simon Newcomb. The two of them recommended him to Johns Hopkins University. He went there from 1887 to 1889 and he studied mathematics, physics, and astronomy. He was the university’s first African-American student. He had to drop out before graduation because he had financial problems. In 1903, he earned a law degree from the Howard University School of Law.

In 1889, Miller started teaching mathematics at the M Street High School in D. C. The next year, he became a mathematics professor at Howard University. In 1895, he also became a sociology professor. From 1907 to 1919, he served as dean of the College of Arts and Sciences. During this time, he modernized the curriculum and he added many new courses. He was focused on recruiting new students. He also worked on building a Negro-American library and museum. In 1919, he became the dean of a new junior college.

Miller was involved in organizations and movements that promoted the rights of African Americans. His political views were moderate – neither conservative nor radical. He was one of the most active and prominent members of the American Negro Academy. In 1917, he wrote an open letter to President Woodrow Wilson against lynching. In 1924, he was chosen as the head of a civil rights conference in Chicago, called Negro Sanhedrin.

Miller often wrote essays and articles. They were featured in over a hundred magazines, such as Educational Review, The Journal of Social Science, and many others. He helped edit The Crisis - the journal of the National Association for the Advancement of Colored People. He worked on papers and sociological and historical researches. He also wrote and published his own books, including Race Adjustment and Kelly Miller’s History of the World War for Human Rights.

Miller’s wife was named Annie May Butler. They had two daughters, named May and Irene, and three sons, named Kelly, Paul, and Isaac Newton.

Kelly Miller passed away on December 29, 1939, on the campus of Howard University. He was 76 years old.

A middle school and a housing development in Washington D. C. were named after Kelly Miller.