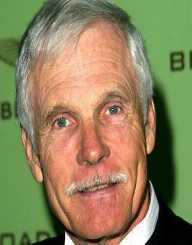 CNN founder and philanthropist Ted Turner was born in Cincinnati, Ohio on the 19 November 1938 to Robert Turner II and Florence Rooney. His father was the president and owner of Turner Advertising.

Ted Turner was a pupil at The McCallie School in Chattanooga, Tennessee (1950). Later he enrolled at Brown University where he studied the classics as well as economics before leaving without graduating. (1957-1960). The university awarded Ted Turner an honorary degree in 1989. Ted Turner did his military service in the US Coast Guard and spent eight years as a reservist.

In 1960 Ted Turner started working for his father’s company, Turner Advertising. After his father’s suicide in March 1963 he took control of the company and founded Cable News Network (CNN) in 1980 and the Turner Television Network (TNT) in 1988. He subsequently renamed the family business the Turner Communications Group.

In 1979 Ted Turner bought two independent UHF stations in North Carolina and renamed them WTCG and WRET. In 1976 Ted Turner Broadcasting Systems became the first to use satellite technology. The same year he bought the Atlanta Braves and the following year, the Atlanta Hawks basketball team. During the 1980s, Ted Turner launched CNN, the first 24-hour news cable network, purchased MGM-UA Entertainment (1985) and founded the Goodwill Games and (1986). In 1992 the Cartoon Network debuted and in 1994, Ted Turner Classic Movies was launched. Then in 1996, Ted Turner sold Turner Broadcasting System, Inc to Time Warner for over $7 billion and became vice-chairman. From 1996-2001 he was a member of the board of directors of Time Warner. AOL and Time Warner merged in January 2001 and Turner was vice chairman of AOL Time Warner Inc from 2001 until 2003.

Ted Turner went into partnership with George McKerrow, Jr in 2002 and they established the restaurant chain, Ted’s Montana Grill. Then in 2007, he partnered with Dome-Tech Solar and founded DT solar, a company which specializes in renewable energy using solar power.

Ted Turner has been the recipient of many awards and nominations including winning the Albert Schweitzer Gold Medal for Humanitarianism (2001), a star on the Hollywood Walk of Fame (2004), being inducted into the Television Hall of Fame (1991), Time Magazine’s Man of the Year (1991), the Peabody Award (1997), Walter Cronkite Award for Excellence in Journalism (1990), the 2014 Emmy Lifetime Achievement Award - Sports and the 2015 Emmy Lifetime Achievement Award - News and Documentary.

In September 2013 Ted Turner was presented with the U.S. Navy Memorial’s Lone Sailor Award for his service in the U.S. Coast Guard.

Ted Turner has been married three times. His first wife was Judy Ney who he married in the early 1960s. The couple had two children Robert Edward IV and Laura Lee. His second wife was Jane Smith whom he married in 1964. They had three children: Beau, Rhett and Jennie and later divorced in 1988. In 1991 Ted Turner married the actress Jane Fonda, and they divorced in 2001.

In 2016 Forbes estimated Turner’s net worth to be in the region of $2.2 billion.

His autobiography Call Me Ted was released in 2008.

In 1990 Ted Turner founded The Turner Foundation with the aim of assisting with the conservation and preservation of the environment worldwide. Then in 1997 he pledged $1 billion to the United Nations and fulfilled the pledge with the final payment made in 2015.