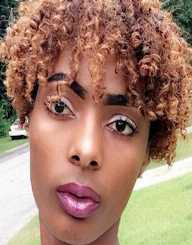 One social media app that itsbambii is popular on is Vine. This was the first major public social media account she made. Itsbambii started to post videos on this site/app in 2014. The Vine website/app allows users (also called Viners) to post as many videos as they want, so long as they are only six seconds long. Some people find it hard to make a video at this time, but not itsbambii, which is why she has so many fans on this site/app as well. She has more than 200,000 fans on this social media platform.

Itsbambii is also famous on YouTube. On YouTube, she cannot post only pictures, so it is her videos that make her famous. Her YouTube channel is called Itsbambii Playhouse. Sher posts a variety of videos on this channel. One of the things that her channel is most famous for is for her makeup tutorials. These aren’t just ordinary makeup videos. Instead, she teaches her fans how to transform into famous celebrities and pop culture figures. Some of her most popular makeup tutorials teach her fans how to transform into singer Nicki Minaj and a Barbie doll.

Itsbambii is also famous for her “story time” videos. This is a common type of video on YouTube in which YouTubers tell stories about their lives. Usually, these stories are over dramatized, which is why fans of itsbambii and other YouTube celebrities find them so interesting. So far, itsbambii’s YouTube channel has almost 500,000 subscribers.

Itsbambii also joined Twitter in 2013, but she did not become popular on the site until after she became famous on Vine and other social media sites. On this site, she shares pictures of herself as well as little bits of texts. She has over 70,000 followers on this social media platform.

One of itsbambii’s biggest complications in life is her sexuality. Born a boy, Itsbambii later came out as transgender and transitioned to become a girl. Her family did not take this transition well at first. Her mother was especially upset by this, as she didn’t want her only son to become a daughter. This caused many complications in itsbambii and her mother’s relationship. The two often fought, and her mother even had her go to therapy to figure out who she was. Eventually, her mother understood and allowed itsbambii to transition.

In recent years, Itsbambii has considered transitioning back to male, but she loves her femininity too much to change. Many transgender teenagers see her as a role model. After all, if she can transition even if her family didn’t 100% agree, then why can’t they? This positive role model aspect of her personality is likely part of the reason why she is so famous.