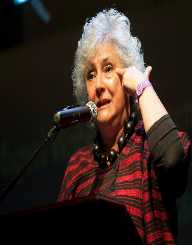 Laura Esquivel is a Mexican politician, novelist, and screenwriter. Born on September 30, 1950, she is the author of Like Water for Chocolate, an imaginative combination of novel and cookbook. It is about a young girl, Tita who expresses her love through cooking because, in the name of upholding tradition, her mother prevented her from being with the love of her life, Pedro. The book became a best seller in Mexico, and its film adaptation became one of the highest grossing foreign films in the United States. Her other novels include The Law of Love (La Ley del Amor) in 1995, Swift as Desire (Tan VelozComoeldeseo), 2001, Malinche: A Novel (Malinche: novel)Esquivel went into politics and now served in the Chamber of Deputies representing the Morena Party.

Laura Esquivel was born on September 30, 1950, in Mexico City, Mexico to Julio César Esquivel and Josefa Valdés. She was the third of four children by her parents. Her father was a telegraph operator and her mother a homemaker. As a trained teacher, she started writing plays for her students by founding a children theatre workshop. In 1970 through to 1980s, Esquivel also wrote children’s television program.

Laura Esquivel took an active part in politics by running on the ticket of the PRD as a preliminary candidate of the Local Council in District XXVII of Mexico City. Running for the Morena Party, she was elected as Federal Representative in 2012. Laura Esquivel was on the Science & Technology and Environmental Committees for the Morena Party and served as the leader of the Mexico City Cultural Committee.

In 1989, Laura Esquivel released one of her major works, Como agua para chocolate (Like Water for chocolate). The novel is set on the protagonist Tita who was prevented from getting married in order to take care of her mother. She, therefore, uses her time in the kitchen when cooking to express her great passion of love. The novel contains recipes, home remedies alongside love stories. Like Water for Chocolate was very successful placing second in sales in 1989. It also went into second and third printing the same year of its publication. In 1990, it became a bestseller in Mexico. The novel has been translated into 20 languages since its release in 1989.

She then came out with the non-fiction compilation Between Two Fires in 2000 containing essays on food, life, and love. Other works of Laura Esquivel includes the third novel, Swift as Desire (Tan VelozComoeldeseo), 2001, Malinche: A Novel (Malinche: novel). Her recent work includes A Lupita le gustaplanchar, 2014 and El Diario de Tita, 2016.

Laura Esquivel has been married twice first to the actor, director, and producer, Alfonso Arau. The two collaborated in several film productions. She currently lives in Mexico City with her current husband.