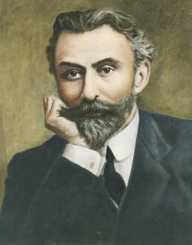 Jamsetji Nusserwanji Tata was born on March 3, 1839, in South Gujarat, India. His father was a businessman, but his family had a long line of Parsi Zoroastrian priests. When Tata was 14 years old, he joined his father’s business in Mumbai. There he also attended the Elphinstone College and graduated as a “Green Scholar.” While he was a student, he married Hirabai Daboo.

Jamsetji Tata worked for his father until he was 29 years old. In 1868, he decided to start his own company. With a ?21,000 capital, he began his trading business. He first bought an oil mill in Chinchpokli and converted it to a cotton mill. After just two years, he sold the company for a significant profit. In 1874, he started a new cotton mill in Nagpur, naming it Empress Mill, to honor Queen Victoria, who was called the Empress of India.

Jamsetji Tata had many big goals for his life, including setting up iron and steel companies, creating learning institution and creating a unique hotel. During his life, he built the Taj Mahal Hotel at Colaba in Mumbai. The hotel was inaugurated in 1903, and at the time, it was the only hotel in India to have electricity.

Tata was also the founder of the Tata Steel- Tata Iron and Steel Company Limited, which was the largest steel company in India and the first one in Asia. The company became the fifth largest steel company in the world. After his death, the Indian Institute of Science was also opened. The Tata Hydroelectric Power Supply Company became India’s largest private electricity company.

Jamsetji Tata and his wife Hirabai Daboo had two sons, Dorabji and Ratanji. His sons later succeeded him in leading the Tata Group.
In 1900, Tata traveled to Germany and got seriously ill. He died on May 19, 1904, in Bad Nauheim.