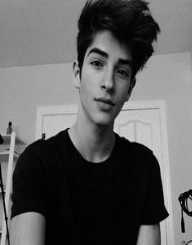 When you come to the world of television, Manu Rios is one of the few youth ruling the world with his talent, skills, and creativity. Manu is a very strong, determined and passionate fellow who has been seen displaying different talent to entertain the audience. His dream is to become the biggest superstar ever known in the world. He kept on working very hard to keep the goal and ambition on. With his massive fame and social fan following him, he has not allowed that to get into his head. He kept on pressing for success and more grounds for achievement.

Manu Rios is very sensitive, highly responsive and funny while acting. He is known to love dancing, singing and surfing the internet. He also loves his pets as the most time spend quality of his time with pets and friends. He also loves listening to music from his favorite stars.

His career and trek into the stardom started while he was barely nine years old. His life was changed for better forever when he was called casually from the production team of Cantando en Familia. When he was called for an audition, Manu Rios impressed the judges at the audition and sealed his fate in the career. He was given the role which he performed very well to the amazement of many. Later on, he got selected for a national TV show, Tu si que vales. This television show gave him the exposure he needed to showcase further a skill he has and which is dancing.

Manu Rios successfully reached the semi-final round of the show. Hewas also cast in another TV show, but this is a musical, Cantame Como Paso. He also has international experience as he played Gavroche in the internationally acclaimed musical Les Miserables. Rio, in 2012, later became a part of the New Parchis teen band through which he performs in Don Pepito. He is a tree of talents as he could sing, act and even dance. His fame and popularity are on the break as his social media accounts are always active with fans.


WHAT DIFFERENTIATE MANU FROM OTHER TEENS?

Manu Rios might be the normal nineteen years old boy on the street if not for what he possesses. Many is an extremely special person that is very ambitious. Looking into his eyes is like seeing the burning furnace of determination, passion, and ambition that can never be quenched by anything. His will to achieve his goals as well as overcome any problem he might encounter in life are his stepping stones to success. Another thing is that he believes that working hard is the bedrock of success, without it, nothing will come up. Thus, he gives his 100 percent at his work. Manu Rios is still in school and not yet ready to give up on his education. Currently, he is pursuing a course in media studies and at the same time trying to be the best.

BEYOND THE MANU RIOS WE KNOW

Manu Rios could be the famous guy with overwhelming friend requests, likes, and retweets on social media but he is that simple-minded guy like boys of his age. He is someone who does not allow his fame to get into his head to become very pompous. Like other guys of his age, he is always ready to go after what he has a passion for. He listens to music especially those from his favorite artists like Adele, Demi, etc. He also enjoys partying, dancing and catching fun with his friends. That is, however, not the least; he enjoys keeping in touch with his pets as well as his books.

Manu Rios was born on 17 December 1998 to Manoli and Julian in Calzada, Spain. His family owns two dogs which he loves so much. He was also known to have idolized Johnny Depp and Anne Hathaway who are his role models, and favorite movie stars. If there are other things he loves apart from acting, they will be surfing the internet, singing, dancing, and photography. Manu Rios is always ready to go with his friend to capture life and pictures of people. He is also known to be a tech-savvy and always ready to update the latest of his works on his social media especially his youtube.