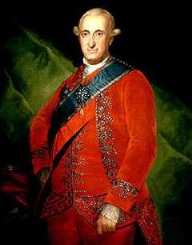 Charles IV reigned as the king of Spain from 1788 until his abdication of the throne in 1808.

Charles IV was born in the Palace of Portici on November 11, 1748, in Naples. He was the second born son of Charles III and Maria of Saxony. Charles III reigned as the king of Naples and Sicily during the time. Despite being the second son, he became the crown prince as his elder brother Don Felipe suffered epilepsy and mental disabilities since childhood. Charles preferred outdoor activities to royal state functions. He became a marksman hunter, earning the pet name El Cazador or The Hunter.

In 1788 King Charles III passed on, paving the way for Charles IV to begin his reign. He was a good hunter but lacked statesmanship as he became the king. He maintained his father’s cabinet for continuity. He professed the ideology of a powerful imperial monarch. In essence, Charles IV left the daily reins of power between his wife Queen Maria Luisa of Parma and the Prime Minister.

In 1792, the royal court deposed the prime minister and Count of Floridablanca. Pedro de Bolea, the Count of Aranda replaced him putting the cabinet under the political protagonists of the king. Pablo Bolea considered a liberal, was an easily manipulated figure by the court. Queen Maria Luisa staged her own coup in the cabinet. She replaced Bolea the Count of Aranda with Manuel de Godoy in late 1792. He maintained a cordial relationship with Charles IV. Godoy’s closeness with Queen Maria led to suspicions of infidelity between the two.

Godoy continued with the liberal ideologies of his predecessor. He maintained a neutral diplomatic stand as France entangled itself from civil strife. In the civil war, King Louis XVI of France was deposed and killed. Godoy led the condemnation of the act. In return, the new king in Paris declared war with Madrid in 1793. Spain turned to neighbor Portugal for protection. The two kingdoms signed a pact of mutual protection from a common enemy, France. As the French revolution wars continued, power changed hands between the Huguenots and the Catholics. Eventually, the Catholics prevailed.

In 1796, Godoy signed a pact with the French to forge an alliance against the Protestant Britain. Spain joined the French in going to war with Britain. In reality, France waged a vengeful war against Britain for supporting the Protestants in the French religious war. The Spanish navy helped France blockade the British kingdom from accessing continental Europe. The Continental blockade lasted until the British navy breached the blockade with a victory in the Battle of Trafalgar against the Catholic allies.

During this time of war, Charles IV relegated the command of the army to Godoy and the queen. He concentrated on his passion for hunting at the expense of running the government. Prime Minister Godoy signed a pact with Britain after the British navy crushed the Spanish navy in a series of battles. France under Napoleon became exposed to the British attacks. In 1807, Napoleon led the French army in a decisive victory against the Prussian German army. Godoy allied himself and the Spanish kingdom with France.

Charles IV became an unreliable figure in European politics. He grew unpopular both within Spain and Europe. In Spain, the population struggled with economic hardships. The government channeled its reserves to fighting the multiple European wars. Godoy was accused of having an illicit affair with the queen. His reliability as an astute leader waned. King Charles IV lost his popularity and goodwill from his subjects.

The Spanish heir apparent to the throne, Crown Prince Ferdinand grew in his popularity in opposing his father. He led an unsuccessful rebellion against the throne in 1807. The supporters of Crown Prince Ferdinand continued with their street protests and town riots. Faced with a major rebellion, King Charles IV sought help from the French Emperor Napoleon. France decided not to interfere in the internal strife despite having 100,000 soldiers in Spain as part of the peace pact between the two kingdoms.

On March 19, 1808, King Charles IV abdicated the throne and was succeeded by his son as King Ferdinand VII. In April of 1808, a month after Ferdinand became the king of Spain, Napoleon summoned a meeting between the two to Bayonne. The French Emperor forced the two protagonists to the throne to abdicate in favor of Napoleon’s brother. Napoleon designated his younger brother Joseph as the first French Emperor of the Bourbon dynasty in Spain. He assumed the Spanish throne as King Joseph I in Madrid.

Charles IV had 14 children with her cousin Queen Maria Luisa of Parma. Out of the 14, only six reached their adulthood.

Charles IV, his wife Maria and Godoy were held back in France for years. When Ferdinand VII later became the King in Spain, Napoleon released his captives. Charles IV settled in Rome. He died on January 20, 1819. He went into history as the king who led to the establishment of the first French Bourbon dynasty in Spain.