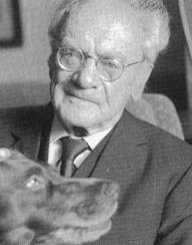 Karl von Frisch was an award-winning and prominent Austrian ethnologist. Born on November 20, 1886, his main research was on the sensory perceptions of the honey bee and was among the first to translate the meaning of the waggle dance. Karl von Frisch published the book Aus dem Leben der Bienen (The Dancing Bee), which contained his theories but all his claims were disputed by other scientist but were later proved accurate. The decorated ethnologist alongside Konrad Lorenz won the Nobel Prize in Physiology or Medicine in 1973.

Karl von Frisch's research was basically on aspects of animal behavior, especially with bees. Karl von Frisch studies led him to discover that bees are flowers constant and able to differentiate various blossoming plants by their scent. Karl von Frisch discovered that bees have a stronger sensitivity to sweet taste than humans do. In 1941, Karl von Frisch used classical conditioning, to prove bees’ optical perception and that honeybees have color vision. Karl von Frisch did this by training sample of bees to feed on a dish of sugar on a colored card.

Karl von Frisch found out that, bees color perception is almost like that of humans, but cannot distinguish the color red from black. They are however able to distinguish colors like violet, yellow, white and blue. Karl von Frisch found out that bees have a great sense of orientation and are able to recognize a direction through three ways including, the sun, polarisation pattern of the blue sky and the earth’s magnetic fields.

Karl von Frisch von Frisch received several awards and honours for his research works including,the Nobel Prize in Physiology or Medicine, Foreign Honorary Member of the American Academy of Arts and Sciences, Balzan Prize for Biology, Austrian Medal for Science and Arts, Pour le Merite, Kalinga Prize for Popularization of Science and Bavarian Order of Merit among several others.