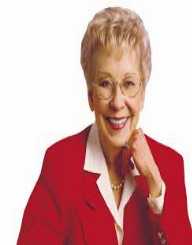 American businesswoman Ruth Fertel who founded the Ruth’s Chris Steakhouse chain was born Ruth Ann Udstad on the 5 February 1927 into a family of modest means.

A gifted student, Fertel graduated from high school at age 15 and then enrolled at Louisiana State University where she obtained a degree in chemistry and physics.

Ruth Fertell taught for two semesters at John McNeese Junior College in Lake Charles, Louisianna in 1946. After marrying Rodney Fertel, the couple opened a racing stable in Baton Rouge. When Fertel obtained her horse training certificate, she became the first female horse trainer in Louisiana. Her marriage did not work out, and in 1958, the couple divorced.

Fertel found herself battling financially to support herself and her two sons. For a few years, she made curtains at home to supplement her alimony payments. She then found a job at Tulane University School of Medicine as a lab technician.

Realising that she could not afford to send her sons to the university on her current income, Ruth Fertel started to think of ways to earn more money. Searching for business opportunities, she discovered a restaurant for sale, Chris’ Steak House in New Orleans. Despite having no experience in the industry, she mortgaged her house and bought the restaurant (1965).  Teaching herself what she needed to know about running a restaurant and working hard, she doubled the income she had previously earned as a lab technician within six months.

The restaurant became famous and even attracted local celebrities, the business community, and others. Fertel sold her first franchise in 1977, in Baton Rouge. In 1993, another opened in the Theater District of Manhatten. At the time of her death, the chain had expanded to 82 restaurants worldwide. Madison Dearborn Partners of Chicago acquired a majority share in the chain in 1999.

In 1995, the Horatio Alger Association named Ruth Fertel Entrepreneur of the Year. Other awards she won include the Elle Brennan Savoir Faire Award (2001). She was also inducted into the Distinguished Restaurants of North America Hall of Fame.

Ruth Fertel founded the Ruth U. Fertel Foundation which offers programmes to support students in Louisiana. In 2015, The Ruth U. Fertel Culinary Arts Center at Nicholls State University was opened in Louisiana. And the Ruth Fertel Keeper of the Flame Award is presented annually in conjunction with the Fertel Foundation and the Southern Foodways Alliance.

Ruth Fertel married Rodney Fertel in October 1948, and they had two sons, Randy and Jerry. The couple divorced in 1958. Ruth Fertel was diagnosed with lung cancer in 2000 and died in 2002, aged 75.