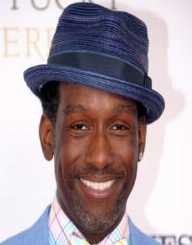 Shawn Stockman is an American music singer, songwriter, producer, and film actor. He rose to fame with all boys quartet Boyz II Men in the early 1990s.

Shawn Patrick Stockman was born on September 26, 1972, in Philadelphia, USA. He is one of the ten siblings born to Thurman Sunders and JoAnn stockman. He picked up singing from an early age in his life. By the age of 8 years, he was already singing in his school choir. At 9 years, he became a regular member of the Philadelphia Boys Choir. He toured with the choir on several occasions. Stockman got an early exposure to his music career. His interest in singing and performing arts gained more resolve. With the encouragement of his parents, Stockman decided to study music in high school.

After his elementary school, Stockman joined Philadelphia’s Creative and Performing Arts High school. He was promptly noticed by the teachers and fellow students for his tenor voice. He continued performing with the school choir. It is at this high school that he met and became friends with four other fellow students.

Nathan Morris, Marc Nelson, Wanya Morris, Michael McCary, and Stockman decided to form an all-boys performing group. They named the group Boyz II Men. The group had its initial share of success in the school. Michael Bivins, a former member of New Edition, noticed the talent in the group. He invited the group for a contract. After all the legal details were over, Boyz II Men went for their initial studio recording. Marc Nelson opted out of the group before the studio recordings commenced. Boyz II Men thus became a performing quartet.

In 1991 they released their maiden album Cooleyhighharmony. The album opened the curiosity of the music critics and announced the arrival of the new boys’ band. One of the songs in the album received much attention. The song It’s the End Of The Road remained in the number spot on US music billboards for 13 weeks. The 13-week record relegated the legendary Elvis Presley to the second position. Elvis Presley’s record of topping the charts had gone unchallenged since 1956.

In 1994 the group released another album. One of their songs I’ll Make Love To You occupied the top spot on America’s Hot 100 Chart. It was dethroned by another song in the album On A Bended Knee. Again Boyz II Men broke long-standing achievements held by two iconic outfits of The Beatles and Elvis Presley. Stockman was the lead vocalist of the group with his tenor voice. He became synonymous with the band.

Over the years, Stockman has made other albums with the group. He still organizes tours with the group when the need for charity arises. Stockman is now a music producer but still keeps close ties with the former band members.

He started acting in films soon after the emergence of Boyz II Men. In 1992 he debuted in the film industry with a role in White Men Can’t Jump. In this film, he featured alongside other celebrities like rap duo Kriss Kross, pop singer Michael Jackson, and basketball great Michael Jordan. Stockman had another cast in the 1995 film Mr. Holland’s Opus. In 2009 he got a cast in the film Blood and Bone.

Stockman is also a television personality. He is a co-panelist in a bench of five judges in the television show The Sing-Off. This is a singing competition aired on NBC television channel. It features accappella groups competing against each other.

Stockman won Grammy Awards with Boyz II Men for their two albums in 1991 and 1994.

Stockman is married to Sharonda Jones. They got married on September 1, 2001. Currently, they have 3 children. The family still resides in the US.

Apart from music, Stockman has a foundation called Micah’s voice. Micah, his son, suffers from autism. He launched the organization in 2012. It helps victims and families of children suffering from the condition.

Stockman still makes music as a producer. The group Boyz II Men is no longer very active. All the members are in private business ventures.

As the lead singer of the group, Stockman has been the face of Boyz II Men even after the glory days are gone. His influence in the group was evident. Though the group had no outright bandleader, he was viewed as the leader by the public. He came in late made a mark and left a taste of good memories in the group and industry.