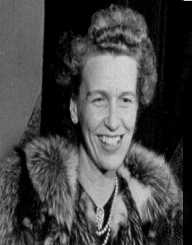 Diana Vreeland was born on 29 September 1903. She was an American fashionista, columnist, and editor. She was also a socialite. She was associated with magazines such as Vogue and Harper’s Bazaar. Her talents in fashion were discovered and nurtured by editor Carmel Snow.

Diana Vreeland was born on 29 September 1903 in Paris, France. She was born to Frederick Young Dalziel and Emily Key Hoffmann who was an American socialite. Her family moved to the United States of America when World War I began. In the United States, they settled in New York City. Diana joined a dancing school where she was trained under Michel Fokine. Her family was famous in the United States, and so while she was young, she featured on the Vogue. She featured on the magazine as a socialite. In 1924, Diana got married, and her marriage forced her to move to London. In London, she joined the ‘Tiller Girls’ with whom she danced with. She later opened her boutique in Berkeley Square as she was popular among the London social class.

Diana later moved back to New York with her family where her publishing career began. In 1936, she became a columnist with the magazine Harper’s Bazaar. She got the job through editor Carmel Snow who loved her sense of fashion. She began a column titled ‘Who Don’t You?’ in the magazine. In her column, she gave out fashion advice which was helpful to a lot of women. She worked with other influential people such as photographers Richard Avedon, Alexey Brodovich and Louise Dahl Wolfe. Later she became the editor of Harper’s Bazaar.

In the 1960s due to her knowledge in the fashion industry, she became the fashion advisor to the then first lady Jacqueline Kennedy. Diana was her advisor during the presidential campaigns. In 1962, she joined Vogue magazine where she became editor in chief. In 1971, she lost her job at Vogue. In the same year, she became a consultant of the Costume Institute of the Metropolitan Museum of Art in New York. During her career at the museum, she organized around twelve exhibitions.

In 1924, Diana got married to banker Thomas Reed Vreeland with whom she had two children. Frecky and Tim. In 1989, she died of a heart attack at Lenox Hill Hospital. She died at the age of eighty-five. The Diana Vreeland Estate was built to continue her legacy in the fashion industry. In 2012, a documentary based on her life titled ‘Diana Vreeland: The Eye has to Travel’ was released.