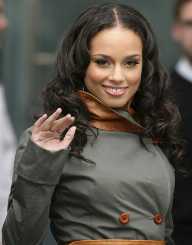 Born and brought up in New York City, Alicia Keys began piano classes at seven years old. Luckily she managed to get a pass out for her talent with Clive Davis, upon completion. Alicia studied at the Professional Performance Arts School. But it was not until 2001, that she entered the music industry with her debut album ‘Songs in A Minor. The songstress has since picked nine Grammy awards, written soundtracks for ‘The Wire’ and ‘Quantum of Solace.'

Alicia Keys (stage name) was born in 1981 on the 25th of January in New York City. As the only child, she was brought up by a single mother, Nikkki Augello. She is a Caucasian, of Italian/Scottish ancestry. She was a casual actress, air hostess and who also practiced as a paralegal at Hell’s Kitchen in New York City.

Alicia’s father is an African-American, who left her at the age of two. At seven years old, Alicia began her piano lessons. That was at her mothers’ assertion. Her extraordinary talent in music gave her a chance to enroll into Manhattans’ Prestigious Professional. She later went to Performance Arts School, where she specialized in the choir. At 16 years, in 2001 she graduated as Valedictorian.

While still in her high school days, Alicia Keys caught the attention of a producer, all thanks to her incredible talent in music. She first signed with Arista in 1998, but in 1999 she moved to J Records. Under the management of Clive Davis; her success has been a phenomenon, with her album, ‘Songs in A Minor.'

‘Songs in A Minor’ had six million copies in sales, and she managed to hold five Grammy awards. In 2001, Alicia was named as one of the People’s Magazine’s ‘Breakthrough Stars.' In 2002, she won Grammy Awards; five awards to be precise. In 2003, Keys managed to launch her album ‘Diary’ and she garnered four awards. In its first week, it sold 618,000 copies in extra and sold worldwide eight million copies. The positive feedback placed the album as the second largest song by an R&B artist.

Unlike most of her pop-music artist, Alicia Keys writes and produces her music. She has been covered in the most famous magazines like the Vanity Fair, Vibe and Teen magazines. In the album “Stripped” by Christina Aguilera, she wrote and produced the song ‘Impossible.'

Alicia has been in television and films. In 1985, she was four years old, and she comfortably hosted ‘The Cosby Show.' Alicia was as well featured on “Charmed”; American Dreams,” “Smoking’ Aces” and more.

Alicia Keys is the “Keep a Child Alive” ambassador. Frum Tha Ground Up, it is an organization committed to encouraging the success of the youth at all levels. She has had appearances in concerts to help the Hurricane of Katrina victims. Alicia had also had a chance to support thirty foundations and charities.

In 2010, Alicia Keys and Swizz Beatz; the hip-hop producer got married. They were blessed with a son; Egypt Dean. He was born in October 2010 and later on they got their second child Genesis Ali Dean in December 2014. Although there was a controversy between the couple, Alicia and Swiss proved the media wrong after he admitted that he married her after he separated from his ex-wife; Mashonda Tifrere.