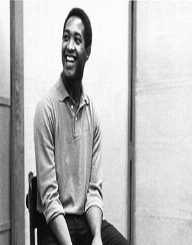 Sam Cooke was born on January 22, 1931. He was an American singer and songwriter. He is popularly known as the King of Soul for his unique vocals. He was also an entrepreneur while he was still alive. He was once credited as ‘the inventor of soul music’ by All Music biographer Bruce Eder. He was also good in pop music, and so he created a connection between soul and pop music.

Sam Cooke was the influence of singers such as Bobby Womack, Al Green and Rod Stewart among others. He sang songs such as ‘Chain Gang.’ ‘You Send Me’ and ‘Cupid’ among so many other hit songs. He also launched his record label as well as a publishing company. He was also known as a Civil Rights pioneer because he participated in the Civil Rights Movement. He died on December 11, 1964, at the age of thirty-three.

Sam Cooke was born on January 22, 1931, in Clarksdale, Mississippi. He was born to Reverend Charles Cooke who was a minister in the Church of Christ (Holiness) and Annie Mae. He was brought up alongside seven siblings. He was the fifth born of the eight children to his parents. In 1933, his family moved to Chicago where he attended Doolittle Elementary. He later attended Wendell Phillips Academy High School.

Sam Cooke began his career when he was six years old with his siblings. They created a group called ‘Singing Children.’ At fourteen he became the lead singer of the ‘Highway QC’s.’  In 1950, he became a lead singer of the gospel group ‘Soul Stirrers.’ The group recorded gospel songs such as ‘Jesus Gave Me Water,’ ‘How Far I Am From Canaan,’ ‘Peace in the Valley’ and ‘One More River’ among other gospel songs. He wrote most of the gospel songs that were sang by the group.

Sam Cooke sang and recorded gospel songs for six years with ‘Soul Stirrers’ before he joined the secular music scene. In 1957, he released his first single ‘Lovable’ which was a remake of the gospel song ‘Wonderful’. He released the song under the alias ‘Dale Cooke’. In the same years he signed a deal with Keen Records. He released his number one hit ‘You Send Me’ with Keen Records. The song became popular and it was a success that it hit number one on the Billboard R&B chart for more than one month. He also recorded and sang ‘Only Sixteen’ and ‘Everybody Loves to Cha Cha Cha’.

Sam Cooke became so popular with his songs that he appeared on the television show ‘The Guy Mitchell Show.’ In 1959, he established a publishing company as he was business minded. In 1960, he signed a contract with RCA that would see him make profits in his business. At that period he delivered the hit singles ‘Chain Gang’. The song also was a success and it became famous ranking number two on the Billboard Pop Chart.

He later got the ownership of all his master recordings. In 1961, he formed his own record label known as ‘SAR Records’. He collaborated with Roy Crain and J.W. Alexander to create the record label. He enhanced the careers of musicians such as Billy Preston, Bobby Womack and Johnnie Taylor. He was a creative writer and he brought a new twist to the songs that he sang.

Sam Cooke married singer and dancer Dolores Elizabeth Milligan Cooke who died in 1959 due to a car accident. At the time of her death, the couple had already divorced, but Sam aided for her funeral expenses. He got married a second time to Barbara with whom he has three children, Linda, Tracy, and Vincent. Vincent died from drowning in the family swimming pool.

Sam Cooke died on December 11, 1964, from a gunshot wound. He was shot by Bertha Franklin who was the manager of Hacienda Motel, Los Angeles, California. She claimed that she shot him in self defence. The court acquitted her because Sam died from justifiable homicide. Sam’s family and loved ones have however not accepted the decision since the circumstances of his death remain questionable.