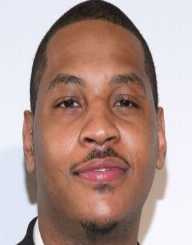 Carmelo Kyam Anthony was born on May 29, 1984, in Brooklyn, New York, United States. He was from a mixed heritage. His father Carmelo Iriarte was a black Puerto Rican whereas his mother Mary Anthony was an African-American. He was the youngest of the four siblings. His father died of cancer when he was only two years old. They moved to Baltimore, Maryland when he was eight.

The neighbourhood Carmelo Anthony's family was relocated to was notorious for its drug abuse and violent anti-social activities including frequent murders etc. Carmelo’s mother, who was supporting her children by working as a housekeeper, kept a tight leash on them so that there could be a safe distance between the crime world and her children.

Sports served as a significant diversion for the young minds from the violence and drug infested environment of their surroundings. Carmelo Anthony, from a very young age, was very fond of playing Basketball. He joined the Towson Catholic High School for his first three years of high school. He was already six feet five inches tall at that time and soon added another three inches to his towering height. Anthony was already regarded as the top basketball player in the area. In 2001, he was declared The Baltimore Sun's Metro Player of the Year and Baltimore Catholic League Player of the Year.

After completion of his junior year, college coaches around the country were eager to recruit him. But Carmelo Anthony was willing to pursue his higher education as well. His poor academic record forced him to transfer to Oak Hill Academy, Virginia. It was a private boarding school with stringent disciplinary regulations and a history of catering to the educational need of the future National Basketball Association players.

In Oak Hill Academy, Carmelo Anthony stuck to his dual task diligently. He was able to better his grade along with becoming the highest ranked high school basketball player in the country. Unlike some contemporary top level high school basketball players like LeBron James and Kobe Bryant, he was averse to straightway joining the NBA, skipping the college education. Hence, in the fall of 2002, he joined the Syracuse University for his freshman year.

In the same year, Carmelo Anthony made his debut in the USA Basketball Junior National Team and helped his team to hold on to a bronze medal defeating Argentina 71-65. He also quickly adjusted himself to the requirement of college basketball games. In 2003, he capped his freshman year with a first ever NCAA tournament title for the Syracuse University. He was also declared the Most Outstanding Player of the Tournament. At this point, Anthony announced his willingness to go pro and eligible for the 2003 NBA Draft.

In the 2003 NBA Draft, Carmelo Anthony, nicknamed ‘Melo,’ was chosen third overall by the Denver Nuggets behind LeBron James (1st overall, Cleveland Cavaliers) and Darko Mili?i? (2nd overall, Detroit Pistons). His selection for his first ever pro season happened on June 26, 2003, and his debut game for Denver Nuggets took place on October 29, 2003. In his sixth NBA game, Anthony scored 30 points. It was a record as he became the second youngest player to have scored 30 or more points in a game in NBA history.

In 2004, Carmelo Anthony became the third-youngest player to reach the 1000 points mark in the NBA history. He again scored 41 points in a match against Seattle Supersonics within just a week of reaching the 100 mark. It was a new Denver Nuggets franchise record for most points in a game by a rookie. Again, he became the second-youngest player in NBA history to score at least 40 points in a game. In the end, it turned out to be a month where Anthony bagged all the six Rookie of the Month awards. His nimble footwork, superb technique and an outstanding rookie season soon catapulted him to the pinnacle of success.

In 2004, Carmelo Anthony was enrolled as a member of the USA National Basketball Team. Subsequently, he made his Olympic Debut in the 2004 Athens Olympic helping his country secure a Bronze Medal. He finished off the 2004-05 season ranking at the 19th position in NBA and achieving the status of the third youngest player in NBA History to reach the 2000 point mark. In the 2005-06 season also he finished at the eighth top spot in the NBA. His other notable achievements during this season are scoring a career best of 45 points against Philadelphia 76ers, reaching the 5000 career points mark and becoming the second youngest player to have achieved such feat.

In 2007 and 2008 Carmelo Anthony was selected to play for the NBA All-Star Team for two consecutive years. In 2008, he again broke his record by scoring 49 points in a match against Washington Wizards.

In March 2008, Carmelo Anthony reached the majestic 9000 career point mark. In 2010, he appeared in the NBA All-Star Game for the third time.

Carmelo Anthony concluded his association with the Denver Nuggets after playing for them in the 2010-11 season. On February 22, 2011, he was traded to New York Knicks in a multi-player deal. With Anthony’s inclusion, the performance of New York Knicks rose astoundingly. Apart from Anthony’s achievement of registering twice as the Player of The Week, New York Knicks also recorded its 50th win, a feat accomplished after 13 years.

Carmelo Anthony is a five-time entrant in the All NBA Selection. He was chosen for the NBA All-Star Team for a whopping six times. He won the NBA Rookie Challenge MVP once in his playing career.

Carmelo Anthony was romantically linked up with La La since 2004. They got married in 2010 at the Cipriani, New York after the birth of their son Kiyan Carmelo Anthony on March 7, 2007.