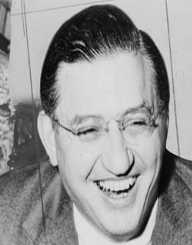 David O. Selznick was born on May 10, 1902. He was an American film producer and screenwriter. David was also a film studio executive. He is famous for producing the hit films ‘Rebecca’ and ‘Gone with the Wind.’ He died on June 22, 1965, at the age of sixty-three.

David O. Selznick was born on May 10, 1902, in Pittsburgh in Pennsylvania. He was born to Florence Anna and Lewis J. Selznick. His father produced and distributed silent movies. He grew up alongside four siblings. David attended Columbia University, New York City. He also apprenticed under his father until 1923 when bankruptcy cropped in. In 1926, he moved to Hollywood where he got a job as an assistant story editor at Metro-Goldwyn-Mayer. In 1928, he moved to Paramount Pictures. Three years later, he became the head of the production at RKO.

At RKO,  David O. Selznick worked on films such as ‘Our Betters,’ ‘King Kong,’ ‘Bird of Paradise,’ ‘What Price Hollywood?’, ‘A Bill of Divorcement’ and ‘Rockabye’ among others. In 1993, he went back to MG to work with his father in law, Louis B. Mayer. Mayer was the studio’s, Chief Executive Officer. With MGM, he produced the films ‘A Tale of Two Cities’, ‘David Copperfield,’ ‘Anna Karenina’ and ‘Dinner at Eight.’

In 1953, David established his own company, Selznick International Pictures. The distribution of his films was done through United Artists. Some of the classics he produced include ‘The Young in Heart’, ‘The Adventures of Tom Sawyer’, ‘A Star is Born’, ‘The Prisoner of Zenda’, ‘The Garden of Allah’, ‘Gone With the Wind’, ‘Made for Each Other’ and ‘Nothing Sacred’ among others. In 1939, he received the Irving G. Thalberg Memorial Award. In 1940, he produced the film ‘Rebecca’ which was a success just like ‘Gone with the Wind’ which was released the previous year.

After he produced ‘Rebecca’,  David O. Selznick closed his company and took a break. He loaned some of his contracted artists to other studios at that time. Some of those actors included Ingrid Bergman, Joan Fontaine, and Alfred Hitchcock among others. David later founded the Selznick Studio and started producing films. In 1944, he wrote and produced the film ‘Since You Went Away.’ He later produced the films ‘The Paradine Case’, ‘Portrait of Jennie,’ ‘The Third Man’ and ‘Notorious.’

In 1930,  David O. Selznick married Irene Gladys Mayer with whom he had two children, Jeffrey and Daniel. They divorced in 1948. In 1949, he married actress Jennifer Jones with whom he had a daughter, Mary Jennifer. In 1976, his daughter committed suicide in Los Angeles. He died on June 22, 1965, of a heart attack. He is interred in the Forest Lawn Memorial Park Cemetery in California. David has a start of the Hollywood Walk of Fame at 7000 Hollywood Boulevard.