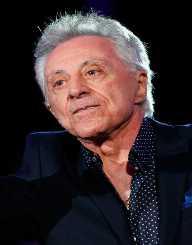 Frankie Valli was the lead singer in the band the Four Seasons. He was also a solo pop singer, famous for his falsetto voice.

Frankie Valli was born Francesco Stephen Castelluccio, on May 3, 1934. He was the eldest of three sons to Anthony Castelluccio and Mary Rinaldi. He lived in First Ward of Newark, New Jersey. When he was seven, he wanted to be a singer after seeing Frank Sinatra in Paramount Theater.

He and his friends, Tommy DeVito and Nick Massi, found music to be their calling. In the early 50s, Tommy DeVito had a group called the Variety Trio, with his brother and friend Nick Macioci (Massi). Frankie was invited to sing as a guest, and he quickly gained popularity after people heard his voice. Jean Valli took him to see Paul Kapp, a music publisher, telling him that Frankie was his brother. “My Mother’s Eyes” was released by Corona Label in 1953, listed under "Frankie Valley.” He later changed it to Valli to match Jeans.

Frankie Valli worked as a barber while performing in The Four Lovers so that he could support himself financially. With the DeVito brothers and Hank Majewski, Frankie’s the Four Lovers had a minor hit with “You’re the Apple of My Eye.” In 1959, the group changed to The Four Seasons, taking in Bob Gaudio. The Four Seasons had Frankie as a frontman, Tommy as lead guitar and baritone, Nick Massi as bass guitar and tone, and Bob Guido in electronic keyboard and tenor vocal.

The first album ‘Sherry & 11 Others’ was released by the Four Seasons in 1962. The album featured 'Sherry,’ and other hits like ‘Big Girls Don't Cry’ and ‘Walk Like a Man.’ They also recorded songs using pseudonym The Wonder Who? For two years in 1965. After the group’s popularity declined, Frankie released a single My Eyes Adored You in 1967, reviving interest in the group.

In 1967, Frankie Valli suffered from otosclerosis; he had to sing from memory until the surgery in 1980. In 1992, the Four Seasons released Hope and Glory album. The musical Jersey Boys featured Frankie and the Four Seasons biographical narrative; the show was successful. In 2012, Frankie made his Broadway debut with a concert engagement at the Broadway Theatre in New York.

Frankie Valli also appeared in films and television shows, most notably in the Sopranos, where he was mobster Rusty Millio. In 1998, he played the role of Frank LoCascio in the TV movie Witness to the Mob. Frankie also appeared in Hawaii Five-0 and Miami Vice.

Frankie Valli has ten solo albums and twenty one albums with the Four Seasons.

Frankie Valli received the National Italian American Foundation (NIAF) Lifetime Achievement Award in 2006 and the Ellis Island Medal of Honor for his commitment to many humanitarian causes in 2012. He received no awards for the music albums.

Frankie Valli married Mary Mandel in his early twenties; he had a stepdaughter and two girls with Mary: Antonia and Francine. He and Mary divorced after thirteen years in 1971; then he married MaryAnn Hannagan in 1974. They separated eight years later.

In 1984, Frankie married Randy Clohessy; they have three sons: Francesco, Emilio, and Brando. He and Randy separated in 2004. Celia died in 1980 died when she fell off a fire escape, and Francine died of a drug overdose the same year.

Frankie Valli supports heritage-related causes such as the National Italian American Foundation. He and The Four Seasons frequently performs in charity events to raise money, such as Houston Children's Charity and other local charities.