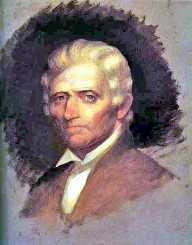 Daniel Boone's father was a blacksmith and a weaver. He married Boone’s mother, Sarah, in 1720, and the couple had 11 children.

At the age of 12, Daniel Boone was given his first gun. The family lived on the edge of the frontier. Native Americans lived nearby, and the Quakers got on well with the Indians, but over time, many of the Indians moved further west as the white population continued to grow.

In 1750, the family moved to North Carolina, settling on the Yadkin River. Although Daniel Boone received some tutoring from family members over the years, Daniel Boone had very little formal education.


The Frontier, Wars, And Indians

The French and British went to war from 1754 to 1763. The governor of North Carolina, Matthew Rowan, called for a militia, and Boone volunteered. Daniel Boone served on the North Carolina frontier, and in 1755, He was a wagoner, coming close to death on one occasion.

In 1762, Daniel Boone returned to the Yadkin River Valley with his wife and four children. Peace had been made with the Cherokee. During the 1760s, with the increase of the population, the amount of game decreased. Daniel Boone quite often could not make ends meet, and eventually sold his land to pay his debts.

Daniel Boone's father died in 1765, and shortly after, Daniel Boone traveled to Florida with his brother, Squire, to see if moving there was an option. In the end, although Daniel Boone had bought land near Pensacola, they didn’t move, as his wife refused to move so far away from her friends and family.

In 1767, Daniel Boone arrived in Kentucky for the first time. Daniel Boone had heard stories about how much game was available there. In 1769, Boone began a two-year hunting period in Kentucky. In December of that year, Boone, along with another hunter, Benjamin Cutbirth, were captured by Shawnee Indians. The Shawnee took their skins and told them not to return, but He decided to continue hunting in Kentucky until 1771 when he returned home.

The Indians were increasingly disturbed by the growing numbers of white settlers, and they banded together to show their displeasure at what was going on. The group comprised of Delawares, Shawnees, and Cherokees.

This was the beginning of what would become known as Dunmore’s War. Daniel Boone traveled through the countryside warning others of the war, and he fought to defend settlements along Clinch River. He was promoted to captain in the militia.

In October 1774, the Shawnees gave up their claim to Kentucky.

The American Revolutionary War began in 1775, and it lasted until 1783. The Native Americans fought against the white settlers, seizing their opportunity to regain control of the land. In 1776 there were less than 200 settlers still in Kentucky.

Daniel Boone's daughter and two other young girls were captured by an Indian war party, but Daniel Boone gave chase with a group of men, and they rescued the girls. In another incident in 1777, Boone was shot in the ankle.

Over the next year, Daniel Boone and others were captured by the Shawnee. Some of the men thought Daniel Boone had traded sides to the British and was sympathetic to the Shawnee, but he managed to escape when he heard the Indian chief, Blackfish, was returning with a large war party.

His family had mostly gone back to North Carolina during this period, thinking he was dead. Daniel Boone helped hold the fort for ten days while they were besieged by the Indians in battle. Afterward, some militia members tried to have him court-martialed, but in the end, Daniel Boone was not only exonerated from charges but was promoted as well.

He continued fighting over the next few months. After the war was finished, Daniel Boone moved to Limestone, which would later become Maysville, Kentucky.

Daniel Boone became quite wealthy at the time. Daniel Boone was elected as a representative to the Virginia State Assembly. He owned a tavern and worked as a horse trader, land speculator, and surveyor.

Over the next few years, Daniel Boone was still involved in war with the Indians. He looked after Shawnees that were captured during the raid, and he helped facilitate a prisoner exchange program.

Daniel Boone soon lost his wealth, as he was duped out of most of his land. In 1788, he moved further upriver to Point Pleasant in Virginia, where he established a trading post. In 1791, he was once again elected to the Virginia State Assembly.

In 1795, Daniel Boone and his wife moved to Kentucky to live with their son Daniel.

In 1799, looking for a fresh start, Daniel Boone and his family moved to St. Charles County, Missouri. At the time, it was part of Spanish Louisiana, and not part of the United States. He was appointed a syndic for the Femme Osage district. He was also appointed the military commandant of the area. He served in the position for five years, at which time, Missouri became part of the U.S.

Daniel Boone nearly lost all his land holdings again when the Spanish relinquished ownership of Missouri, but he had his entitlements reinstated in 1814. He continued to hunt and trap in the surrounding areas, and he spent the rest of his days in Missouri.

Daniel Boone has been remembered over the years in comic strips and movies, and he also had a television series named after him that aired from 1964 to 1970.