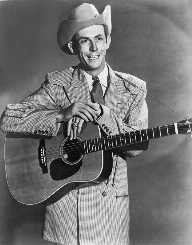 Legendary American singer and songwriter Hank Williams was born on the 17 September 1923 in Mount Olive, Alabama. His parents were Elonzo Williams (b.1891-d.1970) and Jessie Lillybelle Williams (b.1898-b.1955). Hank Williams was the couple’s third child. He had a sister Irene (b.1922). Williams Snr had worked on the railways before being drafted into the US Army during World War I. He saw service between mid-1918 and mid-1919. He sustained a severe head injury and broken bones after a bad fall. When Williams was six years old, his father entered a Veterans Hospital, and Lily Williams raised her two children alone.

Hank Williams was given a guitar when he was a boy, and he taught himself to play. A local street blues musician, Rufus (Tee-Tot) Payne helped with his musical education in exchange for meals at William’s boarding house. Williams would later say that Payne was his only teacher. The gospel choirs, traditional folk music, and country music played, sang and shared in his community also influenced his music.

As a teenager, Williams did gigs in his local area, and after his mother had moved to Montgomery Alabama, Williams formed a backing group the Drifting Cowboys. In 1941 he started singing on a local radio station, WSFA and was soon known as The Singing Kid. His association with the radio station lasted until 1951.

After moving to Montgomery, Alabama in 1937, Williams entered local contests and began to make a name for himself locally. In 1943 Williams met Audrey Mae Sheppard who was from Banks, Alabama. She became his manager, and in 1944 the couple got married They moved into a boarding house that William’s mother Lily was running to support her family.

In 1946 Williams visited Nashville and met with Fred Rose of Acuff-Rose Publishing. Rose was impressed with his songs. This meeting resulted in the recording of Never Again (1946) and Honky Tonkin (1947). Both were successful, and Williams was signed up to MGM Records with Rose taking over as his manager (1947).

His recording of Lovesick Blues led to an invitation to the Grand Ole Opry. Under Rose’s guidance, Williams became a star as he produced hit after hit including Honky Tonkin, I’m So Lonesome I Could Cry, Mansion on the Hill, I Can’t Help It If I’m Still in Love with You, Your Cheatin Heart and other hits. Apart from recording dozens of songs under his name, he also recorded with his wife as Hank & Audrey and as Luke the Drifter. Williams was extraordinarily prolific and produced thirty-seven hits. Other artists began recording his songs including Tony Bennett's version of Cold, Cold Heart (1951).

At the peak of his success, Williams was plagued by back problems and alcohol dependence. In December 1951 he had an operation on his back which did nothing to help him, and his alcoholism increased leading to a reputation for unreliability regarding tour dates. His marriage broke up in 1952, and he also was let go from the Grand Ole Opry the same year for missing shows and drunkenness.

On Rolling Stone magazine’s list of the 100 Greatest Artists of All Time, Williams is listed as number 74.

Hank Williams was born with what is thought to have been spina bifida, and he suffered from spinal problems and severe back pain which later led to his dependence on painkillers and alcohol. After a hunting accident in 1951, the back pain increased, and this led to an increase in Williams’ alcohol dependence.

Williams had a daughter from a brief relationship with Bobbie Jett. Antha Belle Jett (b.1953) was legally adopted by her paternal grandmother after Williams died on the 1 January 1954. She is today known as Jett Williams and is a singer and songwriter.

Hank Williams died from a heart attack on the 1 January 1954.