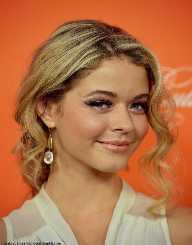 Sasha Pieterse was born on February 17, 1996. She is an American actress. She is best known for her role in the TV Series ‘Pretty Little Liars.’ In her early days, she was also a model. She was a model for most of the top magazines in the United States of America. She got a role in the series ‘Pretty Little Liars’ when she was only thirteen years of age. To date, she still acts in films that comes her way.

Sasha Pieterse was born on February 17, 1996, in Johannesburg, South Africa. Her family moved to the United States in 2001. They lived in Las Vegas for a while before moving to Los Angeles. Sasha was born into a family of entertainers. Her parents were in a group of professional Acrobatic dancers who performed globally in different countries. She did not attend the school like any other kid, but she was homeschooled and graduated at the age of fourteen.

Sasha Pieterse was a model before she became an actress. At the age of four, she was featured on the national billboard of supercuts. She modeled in the Macy’s Passport Fashion Show that allowed her to perform throughout California, United States. In her modeling career, she has modeled for many popular magazines in the United States. In 2014, she was featured on the cover of BELLO magazine ‘Young Hollywood.’ In 2015, she appeared on the cover of Teen Prom Magazine.

Sasha Pieterse got her first break on television at the age of six. In 2002, she co-starred in ‘Family Affair’ as Buffy.  She guest starred in the series ‘Stargate SG-1’ alongside Amanda Tapping. She took the role of a little girl named Grace. In 2005, she appeared in an episode of the series ‘House’ where she acted as the character ‘Andie’ who had terminal cancer. She also debuted in the film ‘The Adventures of Sharkboy and Lavagirl in 3D’ the same year. She portrayed the character of Marissa who was the Ice Princess. In 2007, she starred in the film ‘Good Luck Chuck’ where she was a girl who specialized in placing curses.

In 2007, Sasha Pieterse starred alongside Kevin Bacon, Emile Hirsch, and Forest Whitaker in the film ‘The Air I Breathe.’ In the same year, she also appeared in ‘Claire.’ In 2009, Sasha was cast in the series ‘Pretty Little Liars’ as Allison DiLaurentis. Her character portrays a former high school student who was in the habit of bullying and intimidating other students. She has had a recurring role in the series since it premiered on June 2010. She has appeared in other films such as ‘Without a Trace,’ ‘Heroes,’ ‘X Men: First Class,’ ‘Hawaii Five-O’ and ‘Inherent Vice’ among other films.

On December 22, 2015, Sasha Pieterse got engaged to her long-term boyfriend, Hudson Sheaffer.