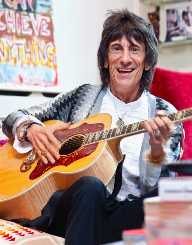 Ronald David Wood was born on 1 June 1947. He is recognized for being a guitarist and bassist for some English bands including Notably Faces and the Rolling Stone. Wood worked on solo albums and produced many successful hits.

He was also a gifted painter with his work being exhibited throughout the U.S and elsewhere globally. To appreciate his musical gift, Ron Wood is a two-time Rock and Roll Hall of Fame inductee.

Ron Wood was born on June 1, 1947, in Hillingdon, London. He comes from a humble background, and his achievements as a British rocker brought him out of his past family struggles. He was born in a family of three boys, and he was the youngest.

Wood displayed a talent for art when he was just three years old when he started painting and later attended the Ealing School of Art. Wood had a talent for creating music, and at the age of 17, he joined a popular rhythm and blues band called the Birds, which had success in the United Kingdom in the 1960s.

Ron Wood worked with the Jeff Becks Group performing as a bassist after Birds disbanded in 1967. He parted way with the Beck after two years after touring and producing two albums.

Despite being given a chance to join the Becks again, he joined a rock band Faces, and the band experienced major success touring Europe and the U.S on many occasions in 1970 to 1975. In 1975 when he was still working with Faces, Wood joined the Rolling Stone and they produced I’ve Got My Album To Do in 1974.  Wood officially joined Rolling Stone in 1975 when the Faces was disbanded.

Ron Wood released over a dozen solo albums in his musical career and co-wrote many songs such as Stay With Me and Its Only Rock n Roll for Faces and Stones respectively. In 2010, Wood released his solo album I Feel  Like Paying showing his impetus for solo works.

On March 25, 2016, a day before a historic visit by then U.S president Barrack Obama, the Rolling Stones performed a free concert for thousands of people in Havana, Cuba. The band’s music had been banned by the communist regime as it was deemed subversive.

Ron Wood is a two-time inductee of the Rock Hall of Fame becoming one of the only 18 other people to be feted such an honor. Wood won and was nominated at the Sony Awards as the Music Radio Personality of the Year in 2011 and 2012 respectively.

Ron Wood is married to Sally Wood since 2012 with whom they have twin girls, i.e., Gracie Jane, and Alice Rose. He was married twice to Krissy Findlay and Jo Karslake. Wood had three children from the two previous marriages. He struggled with alcoholism resulting in his checking into rehab severally.