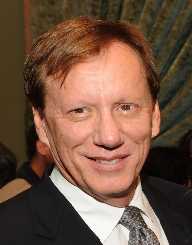 James Wood is an award-winning American actor and producer. James has been impressive in his performance and is widely known for his portrayal of villain characters. He successfully portrays this, thanks to his intense natural eyes and an untrustworthy grin. He has been recognized by winning various movie awards. In addition to his movie success, his voice had been used in a couple of famous animated movies and series.

James Wood was born on 18th April 1947, in Vernal, Utah. His parents are Gail Peyton Woods and Martha A. Smith. His father was an army intelligence officer and died when he was only 13. This was because of unsuccessful routine surgery. His mother worked as a pre-school director. After he husband’s death, she re-married. James was brought up in Warwick Rhode Island, with an Irish decent and Catholic values and customs.

He attained his early education at Pilgrim high school, competing in the year 1965. He allegedly had some top-notch performances and was brilliant in his academics. After this, Woods joined the Massachusetts Institute of technology, among other scholarship options he had. There, he chose to study Political science.

While pursuing his university studies, James joined the `Theta Delta Chi Fraternity.’ This fraternity aimed to improve some social aspects through friendship. James had developed an interest in acting at this time, and joined the student’s theatre club. He featured in many plays at the club and also directed some. In his graduation year, he realized he had great potential for acting, and dropped out. He moved to New York City to pursue his ambitions.

James Wood’s started his career mainly by plays, appearing in about 35 of them. In 1970, he featured in his first Broadway production, named Frank McMahon’s Borstal Boy. He worked with Broadway and the next year; he starred in `The Trial of the Catonsville nine’ and Michael Weller’s `Moonchildren.’

During the same year, James also featured in the film `All the way home.’ His performances in moonchildren were amazing and earned him a theatre world award. His next Broadway job was a Jean Kerr’s production named `Finishing touches.’

Wood is best known for his portrayal of villain characters. His rise to fame role was in the year 1979, in the movie `The Onion Field.’ His role was as a sadistic cop murderer, and he portrayed it to the maximum satisfaction of the producers and managers. Following this, more villain roles came by, featuring in `Black Marble’ during the next year. In 1983, Wood featured in film `Videodrome’ and landed a gangster role infamous movie `Once Upon a Time in America’ the subsequent year.

James Wood later acted in film `Salvador.’ His role was as a photojournalist who recorded the events and happenings of the Salvadorian civil war. His performance was top notch and was nominated for Academy Awards.

During the early nineties, Wood progressed in his career. He was awarded more and more intense character roles. In 1992, he was given a role in film `Citizen Kohn.’ He excellently portrayed his character Roy Kohn and received a lot of praise and admiration for that.

These fantastic performances continued, and in 1995, he played a role in film `Casino,’ directed by a great Hollywood director Martin Scorsese. During the same year, he also had a role as a serial killer in film `Killer- A Journal of Murder’ and in the film `Nixon.’ In the year 1997, he featured in film `Ghost of Mississippi’ with excellent performances that earned him an Academy Award nomination.

Wood later tried to diversify his movie roles and turned to voice characters in animation movies and series. Some of these are; Hercules, Family guy, and Hooves of fire. More so, James Wood has had considerable success in TV films and has earned three Emmy awards in this category. An example is `Too big to fail’ and `Entourage.’

Off the camera, James Wood leads an active, entertaining life. He had admitted to loving Video games, playing golf and to top all these, he is an outstanding chef.

Wood got married in 1980, to Kathryn Morrison, a costume designer, particularly for films. However, the marriage did not work out, and they got divorced in 1983. He later remarried in 1989 to Sarah Owens, but they had a messy break up a year then.

Other Interests And Activities

Poker: James Wood likes playing poker, and does it at competitive levels various tournaments. One of them is WPT‘s Hollywood game series in 2004. He has over 35 event finishes in this sector.

Lawsuits: He has been involved in various trials, for example when he sued actress Sean Young and Kent hospital for negligence allegations on his brother’s death.

Politics: He is known to portray conservative political views on Twitter. In 2016, he endorsed Carly Fiorina for a nomination at the Republican Party.

Religion: He is actively involved in the Roman Catholic Church since his early days. He was once Pope Francis’s critic for the Abortion issue.