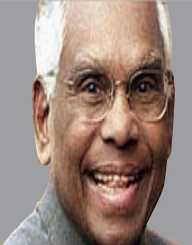 Kocheril Raman Narayanan was born on February 4, 1921, in Uzhavoor, India. His father Kocheril Raman Vaidyar was a traditional Indian medical systems practitioner. Narayanan received his schooling at the Government Lower Primary School in Kurichithanam, and in Our Lady of Lourdes Upper Primary school. In 1937, he passed matriculation from St. Mary’s High School and went to the C. M. S. College in Kottayam. He received the Travancore Royal family scholarship to attend college.

In 1943, Narayanan obtained his Master of Arts degree in English Literature from the University of Travancore. After finishing his studies, he went to Delhi and worked as a journalist for The Hindu and The Times of India. In 1945, Narayanan left for England to study political science at the London School of Economics.

In 1948, Narayanan returned to India and began his public service. He joined the Indian Foreign Service and worked in embassies at Tokyo, London, Canberra, and Hanoi. At various times, he was the Indian ambassador to Thailand, Turkey and the People’s Republic of China. In 1976, he became the secretary to the ministry of external affairs. In 1978, he retired from this post and began serving as the Vice-Chancellor of Jawaharlal Nehru University. Narayanan was recalled from his retirement to serve as the ambassador to the United States until 1984.

After Indira Gandhi requested him to enter politics, Narayanan won the general elections to Lok Sabha in 1984, 1989 and 1991. He was the representative of the Ottapalam constituency. In 1985, he became the Minister of State. In 1992, Narayanan was elected as the Vice President of India under President Shankar Dayal Sharma.

In 1997, Narayanan was elected as the 10th President of India. During his presidency, Narayanan introduced the practice of explaining the nation the process that led to various decisions that led to him exercising his powers. He dissolved the Lok Sabha twice.

Narayanan addressed the problems of the minorities, the poor and downtrodden. He also called out the nation to attend to the issues like violence against women and children, caste discrimination, environment abuse and corruption. Towards the end of his Presidency, there were several communal riots in Gujarat. Due to lack of support from the government, he did not seek for re-election.

After his term as the President ended, Narayanan and his wife lived in Delhi. In 2004, Narayanan attended the World Social Forum where he expressed his support to the alternative globalization movement. The following year, he dedicated his tharavaadu to the Santhigiri Ashram to establish the Navaivothisree Karunakara Guru research center for Siddha and Ayurveda.

Narayanan died on November 9, 2005, after being ill with pneumonia, which complicated with renal failure. After his death, the K. R. Narayanan Foundation was founded to propagate the ideals and keep the memory of him. The fund provides help to women, children, disabled persons and other disadvantaged groups.