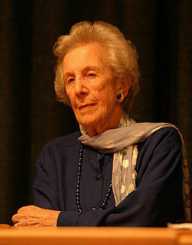 South African politician Helen Suzman was born Helen Govronsky in Germiston, South Africa on the 7 November 1917. Her parents Frieda and Samuel Gavronsky were Luthianian Jews who had immigrated from Eastern Europe. Her family was financially prosperous, and she was privately educated. Suzman’s mother died when she was two weeks old; her father remarried when she was ten.

After matriculating from Parktown Convent (1933), Helen Suzman enrolled at the University of Witwatersrand in Johannesburg. She dropped out of university to get married in 1937 but returned to her studies and eventually obtained a commerce degree majoring in Economic and Economic history.

Helen Suzman worked as a statistician for the War Supplies Board (1941-1944) until 1944 when she joined the University of Witwatersrand as a lecturer in Economic History (1944-1952).

The National Party was elected in 1948, and Suzman then became actively involved in politics. She had become aware of the Fagan Commission on laws which restricted the mobility of black South Africans and realised how the injustices were causing severe problems for those affected.

For 13 years, Helen Suzman was the only member of the Progressive Party as she continually spoke out and criticised the ruling National Party’s apartheid policies. In 1974, six Progressive Party members were voted in, and the party name was changed to the Progressive Federal Party. Suzman, as a member of parliament, had the right to visit prisons and she used that privilege to visit Robben Island where Nelson Mandela and other political prisoners were incarcerated.

Helen Suzman continued to be an outspoken politician; issues she addressed included the banning of the Communist Party, capital punishment, infringements and restrictions on individuals and organisations and other issues. She also spoke out on behalf of women and gender discrimination in the country.

Helen Suzman held her seat for 36 years. She retired as a member of parliament in 1989. Upon her retirement, Nelson Mandela wrote her a letter from Victor Verster Prison, acknowledging her courage and commitment to human rights, equality and a non-racial democracy in South Africa. In later years, she was president of the South African Institue of Race Relations (1991-1993) and was on the Independent Electoral Commission in 1994 when the country’s first democratic elections took place. She also served on the Human Rights Commission.