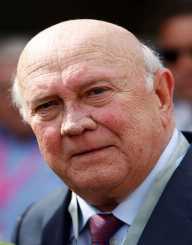 F.W. de Klerk was born on March 18, 1936. He is a South African politician. He is renowned for as the last head of state form the white-minority rule era. Klerk is also famous for being the first deputy President of South Africa. He is renowned too for getting rid of apartheid and introducing universal Suffrage. He is currently Eighty-Two years old.

He grew up alongside one sibling. Klerk was brought up in a political background which in turn led to his interest in politics. He was brought up in GereformeerdeKerk. He alongside his family members later moved to South Africa. Klerk then joined Monument High school. In 1953, he graduated from the school. In 1954, he joined Potchefstroom University where he pursued law and arts. He later graduated with both Bachelor of Law and Bachelor of Arts.

In 1962, he started up his law firm in Vereeniging in Transvaal. He later served the Junior Rapportryers as a National Chairperson. He after that served the Law Society of Vaal Triangle as the Chairperson. Klerk also served as a council of local technikon on a local school board and council of his church.

In l972, F.W. de Klerk became the chairperson of the law faculty in Potchefstroom University. He was thereafter elected into the House of Assembly. He thereafter became Transvaal National Party’s information officer. Klerk later became a member of groups such as Labour, justice Bantustans and home affairs which were parliamentary study groups.

In 1990, F.W. de Klerk was elected the acting State President after the resignation of P. W. Botha. It was after this duration that he was involved in much negotiation including the release of Nelson Mandela from the Prison.

In 1992, he held a whites-only referendum to end apartheid. In 1994, he became a Nelson Mandela’s deputy President. He held this post until 1996. In 1997, he resigned from being the National Party’s Leader. He also resigned from politics. In 1999, he found and became the chairperson of the FW de Klerk Foundation. In 2004, he founded and became the chairperson of the Global Leadership Foundation.

In 1981 F.W. de Klerk received Decoration for Meritorious Service. In 1993, he alongside Nelson Mandela received the Nobel Peace Prize. He is currently an Honorary Patron of the University Philosophical Society of Trinity College in Dublin.

He is also the Prague Society for International Cooperation Honorary Chairman. Klerk received the Gold Medal under the Outstanding Contribution to Public Discourse category. He is currently on the Advisory board of the Global Panel Foundation.

In 1959, Willem de Klerk married Marike Willemse with whom he has three children. They divorced in 1996. In 1999, he married Elita Georgiades. He is currently Eighty two years old.