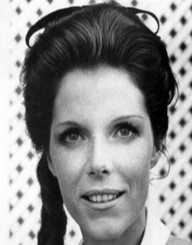 When Samantha Eggar was five years old, she went to a convent boarding school where she spent 12 years. Boarding school offered plays, musical concerts, and exposure to the arts. She also did well at sport and was a competitive child.

She was offered a scholarship to the Royal Academy of Dramatic Arts, but her mother was against acting, and she declined the scholarship. Instead, Eggar enrolled at art school. After graduating from art school, she then studied at the Webber Douglas School for Drama in London.

While still at drama school, Samantha Eggar was offered the part of Lady Hamilton in a Cecil Beaton play. From then on she appeared in various classical productions including Chekhov and Shakespearean plays.

She was in A Midsummer Night’s Dream alongside Albert Finney, David Warner, and Lynn Redgrave, the latter two actors still unknown at that stage.

Betty Box, a film producer, saw Samantha Eggar on stage and cast her in her first film, The Wild and the Willing. Ian McShane and John Hurt were two young emerging actors who also appeared in the movie. Eggar continued working in British film, including dramas and comedies.

Samantha Eggar drew international attention for her portrayal of a kidnap victim, Miranda Grey, in The Collector, which was directed by William Wyler. She was then cast with Cary Grant in the comedy Walk, Don’t Run (1966). It was one of the last films Grant acted in, and he also produced it. Eggar followed this up with Doctor Dolittle (1967), The Molly Maguires (1970) and Anna and the King (1972), a CBS television series starring Yul Brynner. She then appeared on stage in The Lonely Road with Colin Firth and Anthony Hopkin as well as with John Hurt in the Checkov play, The Seagull.

Early in her career, Samantha Eggar won an Academy Award nomination for her role as Miranda Grey in The Collector. She also won the Palme d’Or Best Actress Award at Cannes for the role as well as a Golden Globe. In 1980, she was nominated for a Genie Best Performance by a Foreign Actress for The Brood (1979).