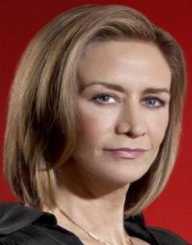 Standing at 6 feet tall, Janet McTeer is the most imposing figure in the British acting and movie world.

Janet McTeer was born in the city of Newcastle to Allan and Jean McTeer. The family welcomed the baby girl on August 5, 1961. In 1967, the family relocated to the town of York. Hence McTeer was brought up in York.

She graduated from the Queen Anne Grammar School for Girls. The school has since been closed. After her graduation, she was employed at the Inn at the Cathedral of St Peter in York.

Janet McTeer left the job for another at the York Theatre Royal. In 1977, she resolved to pursue a career in acting. The following year, she was admitted to the Royal Academy of Dramatic Art at the age of 17.

In 1984, Janet McTeer began her long career in as an actor. She took part in her initial on stage plays at the Royal Exchange Theatre in Manchester. With her commanding presence in demand, directors gave her roles in multiple theaters.

McTeer shuttled between theatre halls for stage acting roles. Most of the productions were derived from the classical plays of Shakespeare and the Russian playwright Anton Chekov. Some of her earliest acts featured the play The Grace of Mary Traverse in 1985.

Two years into acting, she got her first film role. Janet McTeer featured in the film Half Moon Street. The film was set based on the story one novel written by Paul Theroux. Her status as an actor was celebrated all over England. A new star had been born.

The 1990s were the most significant years of her career. She started getting prominent roles in major film productions. Some of the early films were Portrait of a Marriage, Screen One and Screen Two. All of them were done in 1990.

Janet McTeer was in the play Vanya produced in 1992. This translated version of the Russian playwright Chekov cleared the doubts that some of the directors had in her. Four years later, McTeer was in another blockbuster production. Her role in A Doll’s House was well received by the public. She then moved to New York.

Her debut at Broadway made her an overnight hero. She got another role in Tumbleweeds, a production released in 1999. Her role in the film got a record 12 award nominations.

She won three of the twelve. She did her role well to the appreciation of the American audience. Ironically, most directors rejected her presence in the film. It was the confidence of director and producer Gavin O’Connor to give her the role.

When her talent was discovered in America, Janet McTeer got leading roles in three films in 2000. She started with Songcatcher. It was then followed by Waking the Dead, and the last was The King Is Alive. In 2002, she did another cast in The Intended. Over the years past, McTeer has seen her profile rise in the US and England.

Her role in the 2011 film Albert Nobbs was her second best after Tumbleweeds. She got eleven nominations. Out of them, she won one.

Her star was not only in the film and stage acting. Janet McTeer got credit for her roles in television series. The most successful was the series Battle Creek which aired 13 episodes in the single year 2015. Her second best was The Governor. This series aired 12 episodes in two years. This was from 1995 to 1996.

Her versatility has given her a niche in the industry. McTeer has appeared in varied roles giving her a chameleon character. This is due to her ability blend in the roles offered to her.

With workstations in the US and England, Janet McTeer is a shuttle lady. She has a great sense of belonging to her family, especially her parents. She is also a recipient of the Order of the British Empire, OBE, a royal recognition of British citizen who has performed distinguished acts to the society.

Janet McTeer's discovery by the American film producers was dramatic in her career. Over the years, McTeer has seen her fortunes. Currently, at the age of 57, McTeer is still receiving roles from film directors.