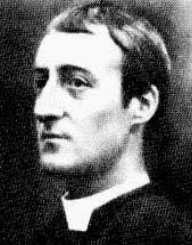 Gerard Manley Hopkins was born 28th July 1844 to Manley and Catherine Hopkins. He was born in Stratford, Essex, in England. He was the eldest child, and he had eight siblings. His father owned a marine insurance company, and he was also a poet with published works. His parents belonged to the Anglican church and were very religious.

From 1854 to 1863, Hopkins studied at a boarding school called Highgate School. In 1863 Hopkins enrolled at Balliol College, Oxford, where he studied the classics. In October 1866, Hopkins converted to Catholicism, and this estranged him from his family.

Gerard Manley Hopkins graduated in 1867, and the Catholic church gave him a teaching position. He taught at the Oratory in Birmingham. During this period, Hopkins studied the violin. In 1868, Hopkins decided to join the ministry. He burned his poetry, and he became a Jesuit.O ver the next few years, Hopkins studied and worked in the priesthood.

He initially struggled with wanting to be in the ministry as well as writing poetry. He was able to reconcile the two, and he realized he could do both. In 1874, he began to teach the classics at Manresa House.

Although an outstanding student, Gerard Manley Hopkins, failed his final theological exam. The church ordained him in 1877, but the exam failure meant he would not progress in the order.

In October 1877, Hopkins began to teach at Mount St. Mary's College in Chesterfield. He then moved to the Jesuit church in Mount Street, London in 1878. Hopkins then moved to several different churches over the ensuing years. He became a professor in 1884. He taught Greek and Latin at University College in Dublin, but he wasn't happy.

Gerard Manley Hopkins fell into a state of melancholy during his time in Dublin. He had a heavy workload, and he missed his friends and England. His health declined, along with his eyesight. After several years of ill-health, Hopkins died on June 8, 1889, of typhoid fever. Most of Hopkins' poetry remained unpublished until after his death. It was then published posthumously.

Some of his best-known works include Pied Beauty, and The Windhover: to Christ our Lord. Another very famous poem is The Wreck of the Deutschland.