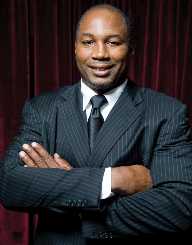 English professional boxer Lennox Lewis was born to Jamaican parents, Violet Lewis and Carlton Brooks, in the East End of London, England on the 2 September 1965. His biological father was not involved in his upbringing, and when Lennox was nine years old, he moved to Canada with his mother. They settled in Kitchener in Ontario. He returned to England and spent time living with his extended family then when he was twelve years old, Lennox returned to his mother in Canada and was raised there.

Lewis was a pupil at Cameron Heights Collegiate Institute. He played sport at school including soccer, basketball and Canadian football.

After disruptive behavior at school in Canada, a teacher advised Lewis to channel his strength and energy into sport. After experiencing a bout of boxing in 1978, Lewis became interested in the game and was coached by Adrian Teodorescu and Arnie Boehm who saw his potential as a boxer. He was also a fan of Mohammed Ali.

At the Canada Winter Games in 1983, Lewis won a gold medal in boxing and one another gold medal at the World Junior Championships. The same year he was named Canadian Athlete of the Year. He started to win major tournaments and was also the Canadian Super Heavyweight Champion 1984-1988 inclusively. Lewis represented Canada at the 1984 Summer Olympics, losing in the quarter-finals to Tyrell Biggs who went on to win the gold medal. At the 1988 Summer Olympics Games, he again made the Canadian team and won a gold medal in the SuperHeavyweight division.

In 1989 Lennox Lewis turned professional and relocated to Great Britain with American John Davenport as his trainer. His first fight as a professional boxer was on the 27 June 1989 against Al Malcolm in England which he won.

Lewis retired as the reigning Heavyweight Champion of world boxing in 2004.

Lennox Lewis is one of three boxers in history who have achieved the distinction of winning the Heavyweight Championship three times. He was won many honors and accolades including an acknowledgment from the late Muhammed Ali as being a fellow one of the greatest. He also won the admiration of Nelson Mandela, who was an amateur boxer in his youth.

Since retirement from professional boxing, Lewis has been involved in various business projects. He assists young Canadian boxers, is involved in multiple charities and is also a philanthropist.

Lennox Lewis is a significant contributor the Muhammad Ali Center. He also has his charity, The Lennox League of Champions Foundation which focuses on inspiring youth to achieve success in life. He supports numerous charities and is involved in social causes.

Lennox Lewis is married to Violet Chang, and they have had four children together.
The couple has a home in Miami Beach as well as a villa in Montego Bay, Jamaica.

One of his hobbies is chess.