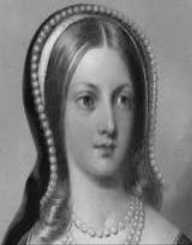 Born in 1537, in Leicester, England, Lady Jane Grey is remembered as one of the most romanticized monarchs of the Tudors time. Mary Tudor dethroned Lady Grey only nine days after her crowning on 19th July 1553.

The Protestant rule that she tried to maintain did not suit other Monarchs and cost her throne itself and her head.

Her father decided to involve her in the quest for the throne due to misguided expectations and ambitions. King Henry VII’s great-granddaughter found herself named the successor to King Edward VI in this trying time. Lady Jane's beheading came on 12th February 1554 due to this treacherous act.

Leicester, England is the birthplace of Lady Jane Grey. Jane was born in 1537 to Henry Grey and Lady Frances Brandon. Lady Jane received proper education to make a good match from an equally good family. Her parents sent her to live with her Uncle Thomas Seymour by the time she was ten years old.

Thomas and her wife Catherine Parr raised Jane as devout Protestant. Jane found her place in Seymour’s household and soon got close to the couple. The following year saw the execution of Thomas Seymour just one year after his wife had passed during childbirth.

Henry Grey used his position as the Duke of Suffolk to introduce Lady Jane Grey to the royal court in 1551. This was aimed at getting his daughter a suitable match. Lady Jane and her sister got married off to prominent families.

The union saw Jane married to Lord Guildford Dudley, the son of the Northumberland. The Earl of Pembroke married Jane’s sister Catherine in the same ceremony.

The plot to power

By the time of Henry VIII’s death in 1547, Edward rose to power. Edward was stricken with tuberculosis at the time of his coronation. His young age and sickness made it easy for members of the court to manipulate him. Some like the Duke of Northumberland, John Dudley tricked the King into naming him the Regent.

In January 1553 the death of Edward seemed apparent, and Dudley saw to it that the throne was not occupied by Mary Tudor, Edward’s half-sister. Henry VIII had previously divorced Catherine of Aragon, Mary’s mother. He also refused to recognize Mary as a legitimate daughter after declaring their marriage null and void.

John Dudley convinced King Edward to continue supporting the protestant reformation and have Lady Jane Grey as his successor. Lady Jane Grey's coronation happened immediately after Edward's death at the age of 15.

Both the parliament and Mary Tudor, relying on the law of succession of 1544, denounced Lady Jane as the Queen. Many who believed that Jane was the rightful Queen changed tunes when it was discovered that Dudley was the schemer.

Many of the supporters of Lady Jane, including her father, abandoned her camp when things got too hot. The council did not believe his support for Mary and thus declared him a traitor alongside his daughter. Her nine-day reign came to a halt on July 19th, 1553 and she was sent to the Tower of London.

The capture and execution of Dudley were the first to take place on 22nd August 1553.  Declaring Lord Guildford Dudley and Lady Jane Grey equally guilty of treason led to their swift apprehension and detention. Due to their young age, they did not get executed immediately, a problem that the Queen soon rectified.

Queen Mary Tudor killed all those who were opposing her rise to the throne to get rid of any opposition elements. The immediate execution of Guildford took place on February 12th, 1554 and only two hours later Lady Jane Grey met the same fate.