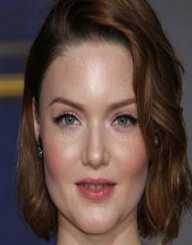 Holliday Clark Grainger was born on March 27, 1988. She is an English Screen actress. She is also a stage actress. Holliday is currently Thirty years old.

Holliday Grainger was born Holliday Clark Grainger on March 27, 1988, in Didsbury, Manchester, England. Her interest as an actress grew when she was in a BBC TV series. In 1999, she joined Parrs Wood High School. She graduated from the school in 2006. In 2007, she joined the University of Leeds to pursue a degree in English Literature. She later joined Open University in which she graduated with a first honors degree.

In 1994, Holliday Grainger sparked her career by appearing in ‘All Quiet on the Preston Front’ as Kirsty. In 1996, she appeared in ‘Roger and the Rottentrolls’ as Kate Beckett. One year later, she was featured in ‘The Missing Postman’ as Harriet. She appeared in ‘Comin’ Atcha’ as Pauline and in ‘Casualty’ as Katie Stoppard in 2000. The following year, she appeared in the films ‘Dalziel and Pascoe’ as Nicola Crowley and in ‘Doctors’ as Nita Harmer. In 2002, she appeared as Older Lisa Bolton in ‘Sparkhouse.’

One year later, Holliday Grainger appeared in ‘Waterloo Road’ as Stacey Appleyard and in ‘The Bad Mother’s Handbook’ as Charlotte Cooper. In 2008, she featured in the films ‘Dis/Connect’ as Jenny, ‘The Royal Today’ as Abigail, ‘M.I. High’ as Leah Retsam, ‘Fairy Tales’ as Leeza Gruff, ‘Waking the Dead’ as Nicola Bennet, ‘Merlin’ as Sophia and ‘The Royal’ as Carole Green. In 2009, she appeared in the films ‘Demons’ as Ruby, ‘Robin Hood’ as Meg and in ‘Blue Murder’ as Jess Burgess. She also appeared in the films ‘Awaydays’ as Molly Carty and in ‘The Scouting Book for Boys’ as Emily.