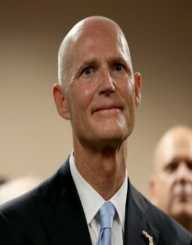 Rick Scott is an American politician and is best known as the Governor of Florida.

Scott was born in Bloomington, Illinois on 1 December 1952. Scott’s parents divorced in 1954, and he was raised by his mother, Esther Fry, and her second husband, Orba Scott. Scott was adopted by his stepfather and took his name. Scott was raised in Kansas City, Missouri. Scott attended North Kansas City High School and enlisted in the U.S Navy after he graduated. Scott served as a radar technician for two and a half years in the navy. Scott ran a donut shop upon leaving the Navy in under to support himself through law school. Scott attended the Southern Methodist University have already graduated from the University of Missouri with a degree in business administration. Scott passed the Texas bar in 1978.

In 1988, Rick Scott invested all his money in the set-up of the Columbia Hospital Corporation. The corporation bought three hospitals in El Paso and shut down one of them. Within a year the corporation was running four hospitals with over eight hundred beds. The corporation quickly expanded in size by buying up similar corporations in Florida and increasing the number of hospitals under his ownership.

Career As A Venture Capitalist

Rick Scott is a lifelong Republican. In 2010, Scott ran for the governorship of Florida. Scott won the Republican nomination by beating, Bill McCollum and Mike McCalister, and securing forty-six percent of the vote. Scott had spent nearly five million dollars just winning the nomination. In the election, he faced the Democrat nominee, Alex Sink. Scott claimed to have spent seventy-eight million dollars of his own money on his campaign, outspending his opponents by more than 3 to 1. Scott received 2,619,335 votes, 68,000 more than Sink. As governor Scott rejected federal funding for a high-speed rail network putting an end to construction.

Scott increased the depth of Miami port to increase shipping capacity. Scott’s law requiring all welfare claimants submit to drug screening was struck down by the courts. Scott also aimed to increase the number of students studying engineering by lowering tuition fees for certain majors related to the subject. Scottflip-flopped on his position on Medicare numerous times and has failed to give an opinion on climate change during his rule. Scott ran for governor again in 2014. He won 87% of the vote for the Republican nomination. He defeated the Democrat nominee, Charlie Crist, by sixty four thousand votes with a slight decline in his vote share.

Rick Scott married Frances Annette Holland in 1972. Scott was nineteen and Holland was twenty at the time and had been going out since high school. Together the couple had two daughters, Jordan and Allison. They lived in Naples, Florida and were founders of the local church.