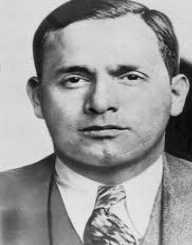 American Mafia founder Thomas "Tommy" Lucchese was born Gaetano Lucchese on the 1 December 1899 in Palmero, Sicily. He immigrated to the United States with his parents, Giuseppe and Maria Lucchese, when he was twelve years of age. They settled in the East Harlem area of New York.

Tommy Lucchese worked in a machine shop until an industrial accident resulted in his right thumb and forefinger being cut off (1915). He then joined Charles Lucky Luciana and his 107th Street Gang.

His first front was a window-washing business, started when he was 18. Lucchese, Luciana, Frank Costello, and Meyer Lansky were part as a small-time gang under the protection of Bronx-East Harlem boss Tom Reina, a known gangster.

They focused on burglaries, steal wallets and small-time gambling. Tommy Lucchese was convicted of car theft in 1921 and sent to Sing Sing Correctional Facility.  After he was paroled in 1923, he again hooked up with Luciana, Costello, Mayer as well as Arnold Rothstein. In 1927, Lucchese was arrested for receiving stolen goods and in 1928 for murder but was acquited on both accounts.

In 1930 in New York City, a power struggle broke out for control of the Italian-American mafia. Known as the Castellammarese War (February 1930-April 1931), the chief protagonists were Joe Masseria and Salvatore Maranzano. Lucchese and his gang under Reina’s protection initially supported Masseria but changed sides and betrayed him.

Tommy Gagliano found out about the betrayal and informed Masseria. Masseria then had Reina killed, and he appointed Joseph Pinzolo head of Reina’s gang. Gagliano, angry at not having his intelligence rewarded by making him the head of the Reina family, formed a splinter group which included Lucchese. A few months later, Pinzolo was murdered, and Masseria then appointed Gagliano head of the gang.

Law enforcement officers believed Lucchese was guilty of Pinzolo’s murder, but after he turned himself in (1930), a grand jury failed to indict him.  Afterward, Lucchese and his gang betrayed  Maranzano who was murdered in his office. The group then had control of the New York underworld and established the modern American Mafia which consisted of the Five Families of New York and the Commission, a national board of directors.

The Commission’s role was to settle family disputes and to prevent any future organized crime wars. In 1943, Lucchese became a naturalized U.S. citizen. During the 1940s, he represented Gagliano at a mob conference in Havana, Cuba. By 1950, Lucchese on the surface appeared a successful vice-president of a garment factory, but he also controlled the textile, truckers and Longshoreman unions.

Tommy Lucchese was the part-owner of the Casa de Paris where celebrities such as Frank Sinatra and Dean Martin dined. In 1951, when Gagiano died, Lucchese became boss of the Gagliano’s and remained so until his death. With the permission of the Commission, the name was changed from the Gagliano family to the Lucchese family.