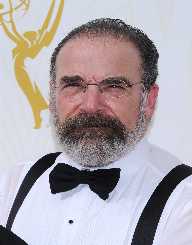 American actor and singer Mandy Patinkin was born on the 30 November 1952 in Chicago, Illinois to Lester Patinkin and Doris Sinton.

Mandy Patinkin’s early stage roles include Leave It to Beaver Is Dead (1979) as well as playing Che Guevara in the Broadway production of Evita (1979). He also started appearing on film, and his first role was in The Big Fix (1979).

These roles were followed by appearances in French Postcards (1979), Night of the Juggler (1980), Ragtime (1981), Yentl (1983) and The Princess Bride. During the 1990s, he was cast in Chicago Hope, a CBS drama that brought his acting talents to national prominence. Mandy Patinkin also appeared in Criminal Minds (205-2007). From 2011 Patinkin has regularly appeared as Saul Berenson in the successful television series Homeland.

Mandy Patinkin has won a Tony Award for Best Featured Actor in a Musical for Evita (1980) and a Primetime Emmy for Outstanding Lead Actor in a Drama Series for Chicago Hope (1995).

Mandy Patinkin married Kathryn Grody in 1980, and they have two adult sons.

Mandy Patinkin was born into the Conservative Jewish faith.

Charities Mandy Patinkin has supported in the past include Americans for Peace Now, the Crohn’s and Colitis Foundation of America and Doctors Without Borders.