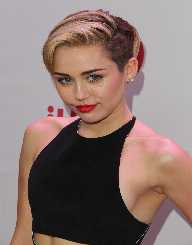 Miley Ray Cyrus was born Destiny Hope Cyrus on November 23, 1992, in Franklin, Tennessee. Her father was a country singer, and the parents named their daughter based on the belief that she will accomplish great things. As a child, she often smiled and was nicknamed Smiley, later shortened to Miley. Her parents secretly married a year after she was born and had two more children together. Her mother had two children from her previous marriage.

Cyrus grew up on a farm in Franklin and attended the Heritage Elementary school. She started work on Hannah Montana and enrolled at the Options for Youth Charter School. The family moved to Toronto in 2001, where her father filmed TV series Doc. The same year, Cyrus saw a production of Mamma Mia! and decided to become an actress. She started taking classes at Armstrong Acting Studio in Toronto.

Cyrus made her debut in 2003, playing a small role in her father’s TV series Doc. Her first big project was the 2003 Tim Burton’s film Big Fish. The same year, she also began to work on the TV series Hannah Montana. Her mother then became her manager.

Disney’s Hannah Montana marked the start of Cyrus’ career. She initially auditioned for a supporting role, but her singing and acting abilities placed her in the lead role. The series premiered in 2006 and quickly became a major hit. Cyrus was quickly labeled a Teen Idol. After the success of show’s release, Cyrus toured with The Cheetah Girls as Hannah Montana. The first season’s soundtrack became a commercial success. At the time, Cyrus had television, film, music and consumer product deals. Cyrus also signed a contract deal for four albums with Hollywood Records.

In 2007, Cyrus released the two-CD album Hannah Montana 2: Meet Miley Cyrus. The first CD was a soundtrack for the TV show, while the other was her debut studio album. The single “See You Again” was a commercial success. In 2007, she embarked on a World Tour, which also was a great success.
Co

In 2008, Cyrus released her second studio album Breakout, which topped the Billboard 200 list. The same year, Cyrus also starred in the animated movie Bolt alongside John Travolta. The project earned her a Golden Globe nomination. The following year, Cyrus released her single “The Climb” which was a soundtrack from the upcoming Hannah Montana film. The soundtrack album went on to top the Billboard 200, making Cyrus the youngest artist in the history to have four albums on the top of this list. In 2009, Cyrus began her Wonder World Tour, during which she also performed for the Queen of England.

Cyrus began transitioning into a more mature image. She starred in the 2010 film The Last Song, which was a box office hit. During the filming, she began seeing her co-star Liam Hemsworth. Her third studio album Can’t Be Tamed (2010) was her first attempt to change her image. This was her first album not to top the Billboard list and was surrounded by many controversies due to her image and content of the songs. Later that year, she embarked on the worldwide Gypsy Heart Tour. She also starred in several TV projects, like the film LOL, and So Undercover.

After her not so successful album, Cyrus decided to hire a new manager- Larry Rudolph. She signed a records deal with RCA Records and showed up with short, blond pixie-style hair. The song “Fall Down” became her promotional single. Cyrus collaborated with various artists, including Pharrell Williams, will. i. Am. And Justin Bieber. In 2013, her single “We Can’t Stop” was released and became a major commercial success. Cyrus received wide media attention after performing at the 2013 MTV Video Music Awards with Robin Thicke.

On October 2013, her album Bangers was released and became a major commercial success. The song “Wrecking Ball” was soon released and, accompanied by the music video, became an instant hit. In 2014, Cyrus embarked on the highly controversial Bangerz Tour.

After her tour, Cyrus began work on her sixth studio album, working with Wayne Coyne. Besides her work on music, Cyrus also starred in the films The Night Before and A Very Murray Christmas. In 2015, she released her fifth studio album Miley Cyrus & Her Dead Petz, which was available for streaming online. Her on-off relationship with Liam Hemsworth continued to draw media attention, but in 2016 she announced that they are engaged.

Cyrus has also worked as the key advisor on the reality TV competition The Voice in its 10th season. She was later signed to the shows the 11th season to replace Gwen Stefani. In 2016, she began to star in Crisis in Six Scenes, a TV series from Woody Allen.