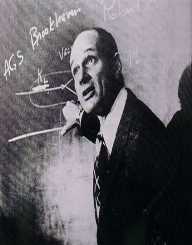 Nobel laureate James Cronin was born on the 29 September 1931 in Chicago, Illinois. He was the son of James Farley Cronin and Dorothy Watson.

James Cronin did his primary and secondary education in the Highland Park Public School system. He then enrolled at Southern Methodist University where he majored in physics and mathematics (1951). In September 1951 Cronin entered the University of Chicago as a graduate student where Cronin did a thesis on experimental nuclear physics. His thesis director was Samuel K. Allison, and he received his Ph.D. in 1955.

Once James Cronin had been awarded his doctorate, Cronin joined the group of Rodney Cool and Oreste Piccioni at Brookhaven Cosmotron. The team was working on a newly completed 3 GeV accelerator where the violation of parity was discovered. Cronin then began working on electronic experiments investigating parity violation in hyperon decays.

The experiment moved to Berkeley Bevatron in 1958 where he worked with physicists William Wenzel and Bruce Cork.

In 1980 Cronin’s research won him the Nobel Prize in Physics. In 1964 he was working at the Brookhaven National Laboratory with Val Fitch Both scientists were also professors at Princeton University when they observed the first example of nature’s preference for matter over antimatter. They concluded that without this phenomenon, known as the charge-parity violation, nothing would exist in the universe.

The two scientists studied the short-lived particles that appeared after the collision of accelerated protons and the nucleus of an atom. They observed the indirect charge-parity violation called the Fitch-Cronin effect. The finding showed that some physical laws are violated when the direction of time is reversed. This theory also favored the big bang theory of the origin of the universe.

Later in life, Cronin became the co-leader of the Pierre Auger Project, a $50 million international collaboration of 250 around the world. The focus of the project was the sources of rare but powerful cosmic rays the periodically reach Earth. Part of the plan is the Auger Observatory in Argentina which has many cosmic-ray detectors.

James Cronin received multiple awards, honorary degrees, and accolades for his work. Some of these include the University of Chicago Alumni Medal (2013). Legion d’honneur of France (2001). National Medal of Science (1999). University of Chicago’s Quantrell Award for Excellence in Undergraduate Teaching (1994). The Ernest Lawrence Memorial Award for Outstanding Contributions in the field of Atomic Energy (1977).

James Cronin was married to Annette Martin until her death in 2005. They had met as university students. In 2006 he married Carol McDonald Champlin. Cronin had three children: Emily, Daniel, and Cathryn.