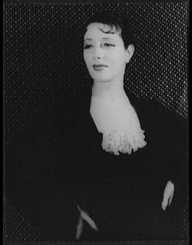 Lynn Fontanne was a British actress who is best known for her work in American theatre and the film The Guardsman.

Fontanne was born as Lily Louise Fontanne on 6 December 1887 in Woodford,London, England. He father, Jules Fontanne was French and worked as a brass type founder. Her mother, Frances Ellen Thornley, was Irish. As a child Fontanne became determined to become an actress. She started acting lessons aged fifteen and a year later began touring England with the play Alice Sit by the Fire.

Fontanne’s first professional work was in a London pantomime in 1909. Her American debut came a year later in a New York production, Mr. Preedy, and the Countess. Fontanne continued to work in America and began appearing in better-known productions such as The Taming of the Shrew and Out There. She began to attract a reputation as an excellent comedy actor after appearing in the farce play, Dulcy. Fontanne had a breakthrough when she appeared in the Broadway production, The Guardsman. The show was a huge success both commercially and critically and ran for forty weeks. Fontanne made her film debut in 1924 appearing in the silent film, Second Youth. She appeared in a second silent film, The Man Who Found Himself, in 1925. Fontanne continued to enjoy success on Broadway with a string of shows in the 1930s.

In 1931, Fontanne made her talking film debut in the film adaption of the play The Guardsman. She performed in England during World War II performing inThere Shall Be No Night to raise morale. Fontanne appeared as herself in the 1944 film, Hollywood Canteen. After the end of the Second World War Fontanne continued to enjoy stage success, O Mistress Mine a 1946 comedy ran for 451 shows. Fontanne finally retired from acting in 1958. She returned in 1965 for the made for television film, Magnificent Yankees, for which she won an Emmy Award.

Fontanne married actor Alfred Lunt in 1922. The pair appeared together continuously throughout their careers. From 1925 Fontanne would only appear in shows containing her husband. The couple revolutionized stage acting. Before the Fontanne-Lunt partnership actors would only say their lines when the previous actor had stopped. Fontanne and Lunt brought a more natural approach to delivering dialogue and would often tread on each other’s lines. The Lunt-Fontanne Theater opened in 1958. They became the first married couple to play a married couple and win an award in 1965 when they both won Emmy Awards for the Magnificent Yankees. They lived together on their Ten Chimneys estate in Wisconsin. Fontanne died of pneumonia on 30 July 1983.