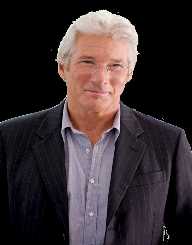 Richard Gere was born in Philadelphia on 31 August 1931. His mother was Doris Ann Tiffany, a homemaker, and his father, Homer George Gere, an insurance salesman. Both prided themselves on being Mayflower descendants. Richard Gere was the second of five children born into the family.

As a youngster, Richard showed an interest in music. Richard Gere played some instruments and was involved in writing music.

Richard Gere attended North Syracuse Central High School. He graduated in 1967. Richard Gere was a member of the student council. He was also a good all round sportsman and was part of the school’s gymnastics, lacrosse and ski teams. He won a gymnastics scholarship to attend the University of Massachusetts.

Richard Gere studied philosophy at the University of Massachusetts.

Richard Gere was cast in the role of Danny in the London stage production of Grease in 1973. He did other plays including the Taming of the Shrew. He slowly started breaking into film, appearing in Looking for Mr. Goodbar (1977).  He won a Theatre World Award for his role in Bent (1980) a Broadway production.  Then his breakthrough role came when he was cast in the lead role in American Gigolo (1980). This cemented him as a leading man in Hollywood and turned him a bankable star.

His next role An Officer and a Gentleman (1982) was also a success. Next came the Hollywood blockbuster Pretty Woman (1990). This won the People’s Choice for Best Movie. Primal Fear (1996) is a crime thriller based on a William Diehl novel. This film focused on a Chicago defense attorney defending his altar boy client against charges of murdering a Catholic Archbishop. In 1999 Roberts and Gere were paired again, this time in Runaway Bride, which garnered $152 million at the box office. Chicago (2002) is a musical comedy set in Chicago in the jazz age.  It grossed $306,776,732 worldwide. Arbitrage (2012) a thriller, was a success for Gere. Critics loved the film, and some thought it his best performance to date.

In 2016 Richard Gere released a film Time Out of Mind focusing on raising the awareness of homelessness. Over twenty-one days, hidden cameras followed the life of a homeless man on the streets of New York.

During 2003 he won the Golden Globe for Best Performance by an Actor in a Motion Picture - Comedy or Musical (Chicago 2002). Richard Gere has been nominated for and won, many other awards.

Richard Gere was married to top model Cindy Crawford between 1991 and 1995.

He married actress and model Carey Lowell in 2002. They had one child together and divorced in 2016. Custody of their son was quickly resolved, but the actual divorce settlement took four years. Under New York law, details of divorce settlements are kept private.

Gere has raised a Methodist.

He has studied and practiced Buddhism since becoming interested while studying philosophy at college.

Richard Gere is a Democrat and has donated generously to Democratic candidates. He supported Obama and backed Hilary Clinton’s run for president.  He has spoken out harshly against President Trump and his policies.

Richard Gere is well known as a humanitarian. He has been interested in the culture of Tibet since visiting the country as a young man. He helped found Tibet House, a nonprofit organization.  He has supported the charity Survival International, a global organization supporting the rights of tribal people with regard to self-determination. Gere is active in speaking out about homelessness. He has long being outspoken in his support of Tibetan independence from China. During the 1980s Richard Gere spent time in South American investigating the refugee camps. Around the same time, he visited Kosovo when the Bosnian was raging. He has a foundation that supports HIV-AIDS issues in India.

In 1993 he used his role as a presenter at the Academy Awards to support Tibetan independence. After that he was banned by from being a presenter again. Richard Gere called for a boycott of the Olympics in China (2008). His 2016 film Time Out of Mind was made to raise public awareness about issues the homeless face on a day to day basis.